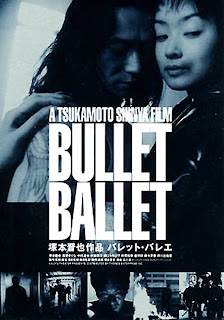 Goda (Shinya Tsukamoto) is a thirty-something documentary filmmaker. While his work may seem intriguing to some his life is absolutely average - long hours at the office, drinks after work, an equally busy girlfriend, Kiriko, that he's been with for a decade. No surprises. No detours. No shocks. That is until he returns home one night to find police cars and ambulances surrounding the entrance to his apartment building. When he gets upstairs he's told that Kiriko has committed suicide. If this wasn't devastating enough Goda also learns that she killed herself with a bullet to the head. With Japan having some of the strictest set of gun control laws on the books not only is Goda left with the yawning, black "why" behind Kiriko's suicide, but also a whole other set of mysterious "hows", "wheres" and "whos". How did Kiriko get a handgun in the first place? From where? And most importantly from who? Goda goes on a quest into the gritty criminal underworld of Tokyo in order to answer these questions, and maybe inhabit the last days of Kiriko's life.

Coming three years after his hyper-intense boxing film "Tokyo Fist" the neo-noir mood of "Bullet Ballet" might take fans of early Tsukamoto a little getting used to. That's not at all to say that "Bullet Ballet" takes its walk on the wild side easy. All the stylistic elements that up to that point defined Tsukamoto's work are present in the film: grainy black-and-white handheld 16mm footage, the teeth-rattling industrial soundtrack by Chu Ishikawa, loving shots of rusted, riveted metal, a cast of characters all seemingly set on self destruct, and quick jagged edits are all here. Here also are Tsukamoto's main themes of our relationship with violence and transformation, although the latter is approached in a more oblique way, but more on that later. The difference is that with "Bullet Ballet" Tsukamoto mixed his grey punk cinema cocktail with a healthy dose of old-fashioned film noir. Goda is a near perfect example of an alienated noir anti-hero, and his search through the shadowy back alleys of Tokyo for a Smith & Wesson Chief's Special handgun is reminiscent of one of Japanese cinema greatest noir drama's, Akira Kurosawa's "Stray Dog". Add to that Kirina Mano's waifish femme fatale Chisato, Goda's love interest and the suicidal counterpoint to the late Kiriko, Takahiro Murase's street hood Goto, Tatsuya Nakamura's club owner and criminal kingpin Idei, and veteran actor Hisashi Igawa as a grizzled boxing coach and you have a narrative set-up that wouldn't look out of place in a Hollywood movie from the 1940's. 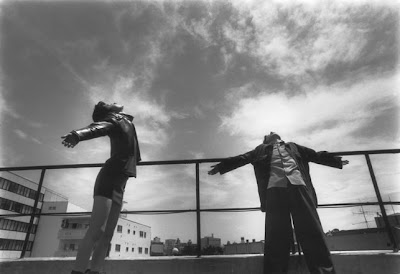 The main thing that sets "Bullet Ballet" apart from Tsukamoto's previous efforts, though, isn't any stylistic or narrative twist or hybridization, but instead a new depth of emotion. Tsukamoto's most recognized and stylistically definitive film is still his break out 1989 independent hit "Tetsuo The Ironman", the jarring documentation of a man slowly being morphed into a machine. The bodily transformation in that film is violent and astounding, but the forces behind it remain a mystery. In 1995's "Tokyo Fist", the trio of main characters become obsessed with boxing and body modification, fetishizing violence while engaging in a dangerous love triangle. With "Bullet Ballet", though, Tsukamoto has his previous themes of transformation and fetishizing violence serve the emotional core of the story, Goda's grief at losing Kiriko. Death cuts deep, even when it's expected as in old age or illness, but Kiriko's death is sudden, shocking and totally unforeseen. Not only does it engulf Goda in a whirlpool of mourning, but it also unleashes his rage, rage at not having been able to see the warning signs of Kiriko's suicide, rage directed towards Kiriko for abandoning him, and most importantly rage fueled by the his loss of control, control that evaporated at the moment that his girlfriend held the Smith & Wesson Chief's Special to her head and pulled the trigger. Tetsuo and Goda aren't that different, both men begin to turn to steel, but in Goda's case it's gunmetal and his motivations are painfully human.

It's the new emotional depth at the core of "Bullet Ballet" that marks it as a crucial artistic turning point for Tsukamoto, one that would lead to later work like 2002's "A Snake of June" and 2004's "Vital", but to think of "Bullet Ballet" as just a grief-soaked prologue to these other wonderful films would be inaccurate. Having recently popped the out of print Arts Magic DVD of "Bullet Ballet" in for a look I found myself as enthralled as the first time I saw it several years ago. This is Tsukaomoto at the height of his technical powers, using his stark visuals to hook the viewer in and refusing to let go until the final frame. It's for this reason that "Bullet Ballet" can truly be called a great film.
Posted by Chris MaGee at 8:57 PM