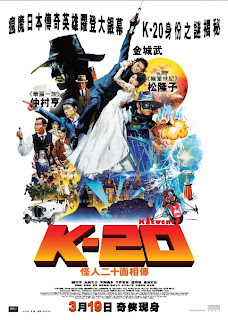 Like a mad combination of "Darkman", "Robin Hood and The Rocketeer", "Kaijin Nijū Mensō aka The Fiend with Twenty Faces" flies through the air, stealing exotic pieces of art from impenetrable locales. Set in a fictional future, where World War 2 was averted, the capital of Japan , known as Taisho, is occupied by the feudal aristocracy who own 90% of the countries wealth, and the poor, who share the rest. The divide between them is great, the middle class nonexistent. In the alternate steam punk setting, the Kaijin only steals from the rich, and always sends a message to authorities, letting them know what he's going to steal, only adding to the flair and high profile nature of his crimes. But who is the masked man who has a seemingly unlimited number of identities, and who continues to elude capture?

Enter Heikichi Endo (Takeshi Kaneshiro), a talented circus acrobat who unwittingly becomes the target of the Kaijin's master plan. Set-up to appear as if he's in fact the Kaijin, Endo quickly finds himself on the run from Johnny law. In order to prove his innocence, he decides to gallivant around the city, disguised as the Kaijin, in hopes of drawing him out. It comes easy, not only because of his amazing acrobatic skills which allow him to imitate the Kaijin's physical antics, but also because Genji (Jun Kunimura), a prop maker for the circus, also happens to be able to fashion all kinds of gadgets for Endo, including the Batman like grapple gun that he uses to fly through the air, swinging from building to building. Of course, all this swinging attracts the attention of the Kaijin's arch nemesis, Detective Kogoro Akechi (Toru Nakamura) and Endo finds himself involved with Duchess Yoko Hashiba (Takako Matsu). She of course quickly realizes that Endo is not the real Kaijin, and sets about to help him prove his innocence and find the real masked villain. 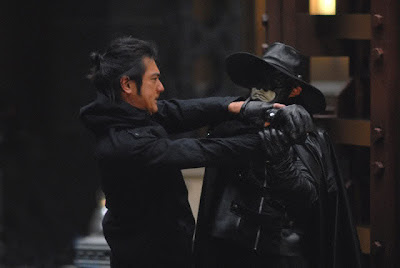 "K-20" is billed as an action spectacular, and for the most part it is. Based on the novel by Soh Kitamura, which in turn was based on the character created by Edogawa Rampo, the film has to be spectacular to please the mass public who so deeply love Kaijin Nijū Mensō, as well as Detective Akechi, Edogawa's Sherlock Holmes type character who was used throughout the author's career. Casting Takeshi Kaneshiro was definitely a wise choice. Charming as always, he manages to make even the worst film seem passable. Cinematically the film is fantastic, Nippon Television Network using the same crew behind "Always -Sunset on Third Street" hoping to mirror that films success. It features some truly stunning action sequences featuring the ever popular Parkour. Using two Parkour practitioners from Russia and using no CG for the stunt work, the action scenes are definitely the high point of the film. But don't fret, there is still plenty of CG to build the steam punk world of Taisho, and most of it is pretty stunning. Sure a few explosions here and there appear a bit questionable, but overall, they are well done.

"K-20" is not without its faults. For one, it is a big budget film aimed at a mass audience, so in parts it does tend to get a tad melodramatic and/or incredibly cheese ball. It's also pretty apparent early on in the film who the Kaijin really is, so when the big 'reveal' comes at the end, it's not really surprising. This being an action spectacular, and one written and directed by Shimako Sato, a director of among other things, a few videogames (including one in the Onimusha series, which also features Takeshi Kaneshiro funny enough), the viewer is warned to shut off their brain prior to viewing. There are a few actions taken by Endo in particular that in hindsight don't make any sense at all. And of course, if you're an avid Rampo fan, then you'll be plenty pissed at the drastic changes to the mythology of the Detective Akechi and Kaijin world, although I think the Kitamura novel upset those people long before this film did. But in the end it is a high flying adventure film, and it definitely does manage to entertain. And include everything from the Tesla to Tunguska !

Read more by Matthew Hardstaff at his blog.
Posted by Chris MaGee at 10:07 PM