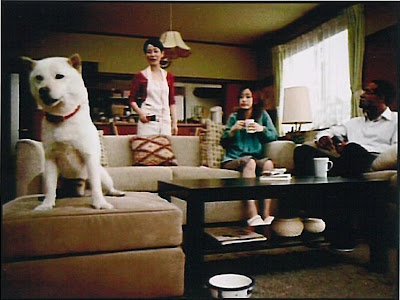 It's no secret that 46-year-old auteur Quentin Tarantino is a fan of Japanese films. This of course is the man who named Kinji Fukasaku's "Battle Royale" the best film made in the past twenty years and who famously mined Japanese action, martial arts and exploitation films of the 60's and 70's for his two-part magnum opus "Kill Bill". That's why it seems like a no brainer that Tarantino would end up being one of the many Hollywood celebrities who, although they might shirk appearing in commercials on this side of the pond, end up endorsing products in major Japanese TV campaigns. Yes, Tarantino has signed up to shill for Japanese cellphone provider Softbank, but this is much more of a commitment than a single TV spot.

Japan Today is reporting that the "Pulp Fiction" director will be joining the current "White Family" (above) that appears in adds for Softbank's cellphones as their crazy uncle, Tara-chan. The "Family" already consisted of actress Aya Ueto and ex-pat American actor Dante Carver as sister and brother and actress Kanako Higuchi as the mother.

Ueto told reporters at a recent press conference that Tarantino, who shot his role in the series of commercials while in Japan promoting his latest film "Inglorious Basterds", had "ad-libbed his whole samurai persona and was so enthusiastic. His energy was really surprising.” Tarantino enthusiastic and energetic? I can't imagine... Well I don't need to. You can check out a taste of Tarantino in character as Tara-chan in the YouTube clip below.