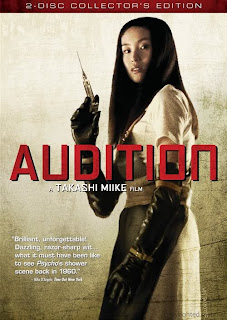 I’ll start by saying "Audition" is one of my horror favourite films, and my second favourite Miike film after "Visitor Q", so it would be easy for me to write a glowing review, praising Miike for his audacity in making this stunning piece of cinema. But I’m going to try and not do that. The film, for those unfamiliar, follows Shigeharu Aoyama (Ryo Ishibashi), a widower, who with the help of his producer friend Yasuhisa Yoshikawa (Jun Kunimura) set up a fake audition so that he can scout potential females for companionship. Aoyama becomes captivated with Asami Yamazaki (Eihi Shiina), a quiet and reserved former ballerina. At first their relationship appears to be spectacular, but a relationship built on lies can’t last forever, and as Asami and Aoyama grow closer, so does the darkness seething under the surface.

The film is based on a book by man of many talents Ryu Murakami. Without him, this film would not exist, so let us first heap our praise on him. An extraordinary writer with talent to burn, much of his work deals with trauma, especially childhood trauma, and how it affects the people we become. Usually it has drastic and disturbing repercussions, combing sex and violence into a hallucinogenic orgy. Here he infused the same exploration of trauma, this time relating it to how it affects how one learns to love. What’s shocking though is that while he gave birth to the idea, it was someone else who took the finale into a wild and psychedelic direction. 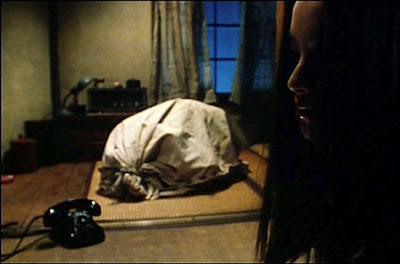 Daisuke Tengan, son of Shohei Imamura, adapted the book for the screen. He took the tale in a wild direction. He fractured the narrative, and gave it a surreal, almost Lynchian edge that didn’t exist before. He wrote things he didn’t think anyone would actually film, but the beautiful thing about "Audition" is almost everyone involved doesn’t seem to be content making crowd pleasing films. They want to make something different, something reactionary, and something that will get some kind of response, good or bad. And so they play off of one another, building upon the others work.

Miike took the blueprint written by Tengan, and created a horror masterpiece. But wait, there’s more. Much of my new found knowledge on the film I gained from listening to the audio commentary on Shout Factory’s new Blu-ray collector’s edition. One interesting fact is that Eihi Shiina’s performance, which becomes the spine of the film really, was entirely created by her. Miike didn’t understand the character, and chose not to. He preferred to have Shiina remain a mystery to him, and internalize everything. He didn’t direct her performance at all and even asked her for clarification on some of Asami’s musings. Asami is all Eihi Shiina. Without her, this film would be very different, and dare I say it, not nearly as good. She somehow manages to be cute, sexy, mysterious and downright scary, all at the same time. And you sympathize with her, no matter how horrific her acts becomes.

The last person I should mention is Hideo Yamamoto. Miike’s worked with him on several films, including "Fudoh: The New Generation", "Ichi the Killer" and most recently "Yatterman." He’s also shot "The Grudge", "Dai-Nipponjin" and "Hana-bi". In short, he’s a talented cinematographer. And his work in "Audition" is outstanding. He literally paints with colour, splashing reds, blue and yellows across the frame. I’m sure Miike, who has final cut, was heavily involved in how the film was put together, but its Yamamoto’s eye that captured Tengan’s words and turned them into the striking visuals we see before us.

In short, "Audition" is amazing. But not just because of Miike. Because it was assembled by a crack team of specialists who set out to make a different kind of horror movie. And coming at the height of the J-horror craze, it couldn’t have come at a better time. And yet, even now, very few films are as visually striking, narratively challenging and emotionally shocking as "Audition".

Read more by Matthew Hardstaff at his blog.
Posted by Chris MaGee at 10:54 PM