REVIEW: I Am Waiting 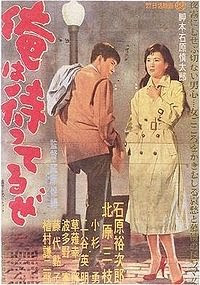 Though the story of Koreyoshi Kurahara's first feature film "I Am Waiting" is a mix of Film Noir tropes and melodramatic characters, its style is pure Noir. The shadows bounce and play off the rainy streets, fences, curtains and windows to create an environment that seems to have trapped its protagonists. In fact, the very opening shot is of rain pelting into a puddle which distorts the bars of a nearby fence while the lyrics of the opening tune are about fog rolling in and obscuring the pier. A fine setup for the story of two people who are waiting for their dreams to happen, but don't seem to have many options to help them along.

This theme is reinforced via the numerous modes of transportation that seem to pass the characters by without even slowing down. Our hero Joji Shimaki (as played by the handsome young Yujiro Ishihara) owns a little dive called The Reef Restaurant just off the piers and to the side of the railroad tracks - both indicating ways out, but neither giving the opportunity. So Shimaki keeps waiting. In particular, he's waiting to hear from his brother who left for Brazil a year earlier. Once settled on newly purchased farmland, he was to contact Shimaki to let him know it was time to leave Japan for good and come work on the farm. The quiet life of tending fields has become Shimaki's sole remaining dream. Shortly before Brazil was an option, he quit his boxing career after killing a man in a fight. He admits that he purposely threw a punch that was intended to kill the man and that his anger got the best of him. 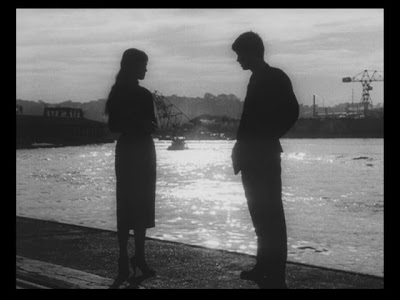 Joining him in this waiting game is Saeko (Mie Kitahara, Ishihara's co-star in the previous year's influential "Crazed Fruit"). She too has a past - both as a singer who has lost her operatic voice due to an illness ("I'm a canary, that's forgotten how to sing") as well as a lounge crooner who has run out on her contract. The reason for the latter is that she's convinced that she accidentally killed a gangster associate of her boss while fending off his advances. She fled the club and when Shimaki finds her down by the water's edge, she is literally at a stand still not knowing what to do next. Shimaki invites her back to his restaurant to dry off, offers her a place to stay for the night and, over the next few days, she begins to work at his restaurant as a waitress. The newspapers show no signs of an unsolved murder being investigated, so she feels somewhat better, but her dreams are still shattered. She wonders if there is anything left for her since even the small hope of finding some happiness with Shimaki seems remote - "There's nothing here for me anymore" he states several times. So they continue to wait.

The film frames the characters behind beaded curtains, windows with slats, chain link fences and anything else that might restrain them, but of course they aren't really being held back...It's their own unwillingness to affect change and their worries about their pasts rising up again that prevent them from seeing other opportunities right in front of them. Shimaki finally gets a rude awakening when all of his letters sent to his brother in Brazil get returned to him marked as "addressee unknown". He feels betrayed not only by his brother, but by the entirety of humanity as well. After waiting an entire year for nothing, he's angry and frustrated with himself, but once he sees a connection between Saeko's old boss and his brother he focuses that anger elsewhere. The emotions of both Shimaki and Saeko are always raised, so there's less of a sense of a fatalistic outcome and overwhelming doom that many American Noirs would bring to the story at this point. It's more about the characters themselves and whether they will find a way to get on with their lives. Saeko's role isn't that of femme fatale, but of a confused young woman while Shimaki needs to shake off the cobwebs accumulated while he was in limbo.

All this allows the audience to be invested in the characters. It makes for a slower paced story, but along with the visual treats there's certainly enough to keep viewers engaged. It's a welcome inclusion to the Eclipse Nikkatsu Noir set.