REVIEW: Sword of the Beast 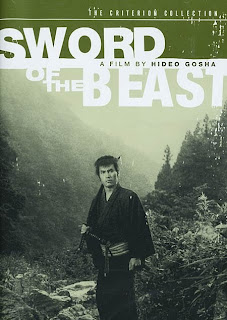 After a long stretch of reviewing many different kinds of Japanese films, there’s nothing quite like coming back to one of my favorite genres: the 1960s samurai film. For me, it offers a fun, adventure-filled, black-and-white comfort zone chock full of wandering ronin, loyal samurai and the glimmering promise of riches to be found or honor to be upheld. This week, I really lucked out and found a ripe specimen that contains all of those things: 1965’s “Sword of the Beast.”

“Sword of the Beast” is the second film by Hideo Gosha, who would go on to make “The Wolves” and “A Geisha.” It stars Mikijiro Hira as Gennosuke Yuki, a lone ronin on the run from his former clan. In his previous life, he killed a counselor, believing at the time that he was acting for the cause of necessary reform when in fact he was nothing more than a pawn meant to help others gain power before being eliminated himself. Betrayed, he reinvents himself as a wandering, masterless beast and soon finds himself in the middle of a struggle for control over illegal gold mining operations on the shogunate-owned Mount Shirane. 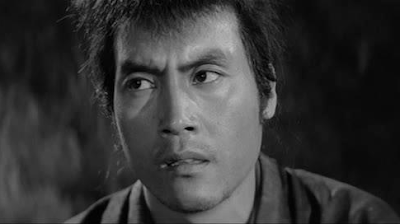 Set in 1857, the film addresses the wave of changes in Japan brought about by Western culture that hastened the death throes of the samurai class. The disillusioned Gennosuke is the product of the clan’s embrace of greed and corruption while honor and loyalty are sadly neglected – but not entirely forgotten. An interesting conflict stems from two of the ronin’s pursuers: Daizaburo (Kantarô Suga), his former comrade, believes Gennosuke, as a former samurai, deserves to die with respect while Misa (Toshie Kimura), Daizaburo’s love interest and the daughter of the fallen counselor, only sees Gennosuke as a wild beast who deserves to die like one. Then there is Jurota (Go Kato), the skilled swordsman who mines gold with his wife Taka (Shima Iwashita) for his own clan and kills any inquisitive passers-by who might expose their operation. He is all but blinded by his ambition to climb to the rank of full-fledged samurai, at several points making it clear that the gold’s safety is higher on his list of priorities than his wife’s while never suspecting the same sort of betrayal that sent Gennosuke into his exile. Not too far beneath its adventure film exterior, “Sword of the Beast” gives a bitter analysis of the samurai code’s tragic dissolution.

However, Gosha still devotes most of his film to an exciting and spirited romp through late Tokugawa-era Japan . The opening sequence, set in a vast field of tall grasses, sets the action into motion admirably as Gennosuke pries himself from a woman’s advances and fights off a party of armed men, snarling, “To hell with name and pride! I’ll run and never stop!” A little later, the hunters plan an attack on their quarry as he rests in the back room of an inn, providing an excellent, suspenseful set-up for the mayhem that follows. Upon arriving at the forest-covered mountain, Gennosuke forms a sort of partnership with a small-time crook who provides some comic relief between all the ambushes, chases and double-crossing that goes on in the film.

I wouldn’t at all hesitate to put “Sword of the Beast” alongside such other rollicking rides as “Kill!” and “The Hidden Fortress.” Like those films, it recognizes the earthy potential offered up by the alluring, story-rich jidai-geki genre and, sword unsheathed, confidently moves in for the kill.

Read more by Marc Saint-Cyr at his blog.
Posted by Chris MaGee at 4:55 PM