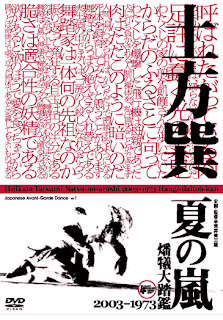 In the world of modern dance there are few individuals who had as much impact as Tatsumi Hijikata. Not heard of the name? Well, if you're a fan of the films of Teruo Ishii you will remember Hijikata for his role as the Dr. Moreau-like evil genius Komoda in "Horrors of Malformed Men", and as the hunchbacked dancer in "Blind Woman's Curse". Hijikata was born in Akita Prefecture in 1928 and although he was trained in his youth in classical dance forms, both Japanese and European, it was his love for authors like Antonin Artaud and his "Theater of Cruelty", Jean Genet, and Yukio Mishima as well as a desire to capture the beaten down essence of the farmers and workers from his rural upbringing that lead him to push dance into radically new, exciting, and sometimes frightening territory. During the 1950's he joined forces with choreographer/ dancer Kazuo Ohno and the two inverted the goal of most classical dance, the achievement of an idealized beauty and rhythmic harmony with music to create a whole new art form. Hijikata dubbed it "Ankoku Butoh", or the "dance of darkness", an exploration of the very essence of the human body and its ultimate death it took muscle memory as paramount over intellect, the transformation into other forms of life (animals, insects, etc.) instead of perfection of technique. In their first public performance in 1959 titled "Kinjiki (Forbidden Colours)" the audience and critics were outraged when near the end of the performance Hijikata and Ohno had Ohno's young son hold a live chicken between his legs before it was strangled to death.

It was obvious from the beginning that butoh was not an afternoon at the ballet. This was a direct expression of the world below the waist, of excrement and sex and worn joints and feet planted in black soil; but as Japan progressed from its days of abject poverty following WW2 and through the 1950's and 60's the populace didn't want to dwell on death, decay, and disease. In many ways Hijikata's new art form was a representation of the shadow side of the post-war Japanese psyche, one that was still reeling from the near total destruction of its cities and of the horrors of the atomic bomb. Maybe it was for this reason that butoh never found a foothold in mainstream Japanese culture, but remained an outlet for expression and catharsis for the nations marginalized youth who were concerned with student protests, street "happenings", and radical politics. Thankfully butoh's popularity and influence spread overseas, especially in Europe which is one of the reasons that it remains to this day, although it's interesting to see how the butoh look of white make-up and twisted movements made it's way into the ghosts and ghouls of such J-Horror films as "Ju-on" and "The Ring". 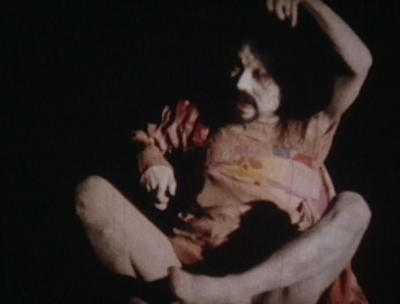 This isn't a rundown of the history of butoh and its continuing cultural impact though. This is a film review for "Tatsumi Hijikata: Summer's Storm", a film of a 1973 performance by Hijikata and his troupe of dancers, Hangi daitoh kan, that took place on the campus of Kyoto University. Directed and edited by Misao Arai, who also worked as an assistant director under Teruo Ishii and went on to direct various low-budget horror films at Toei Studios, "Summer's Storm" is a perfect example of medium matching content, although this was obviously more by accident than design. With butoh being such an underground art form it's unlikely Arai would have been able to secure 35 or even 16mm film stock to capture this event. We're therefore left with sometimes grainy, unfocused and smudged 8mm footage spliced together from the three cameras Arai used to shoot the performance. Even though the staff at Image Forum, the people behind this DVD release, have done their best to digitally refurbish the film as best they could "Summer's Storm" still has the feel that it hadn't just been unarchived, but excavated. The images of Hijikata and his dancers, their semi-naked bodies powdered in white ash, seem like spirits in the film, constant reminders of the very mechanics of celluloid film technology - light and shadows cast in total darkness - and consequently an extension of Hijikata's "dance of darkness".

Beyond these ideal aesthetic qualities the original 8mm footage that Arai shot, the only surviving colour footage of Hijikata and Hangi daitoh kan that exists, provides an early glimpse at the next generation of butoh performers and choreographers, although the Image Forum DVD does little to point them out to uninitiated viewers. A year after this film was shot Hijikata would retire from public performance, choosing instead to live in seclusion and work with the dancers in his troupe until his death in 1986 from liver failure due to years of alcoholism. The most notable student of Hijikata's who can be seen prominently in "Summer's Storm" is the young Yoko Ashikawa. The power of her dances rivals that of Hijikata's, with whom she would train for nealy 20 years, and it's easy to see why she has gone on to found her own troupe, Hakutobo, and become one of the premiere proponents of butoh today. Despite not pointing out the identity of dancers like Ashikawa or giving much background on butoh itself ("Tatsumi Hijikata: "Summer's Storm" isn't a documentary after all) Image Forum has spliced in some new footage, mostly to elaborate on some of the references in the titles of the dances like the stone rakan or "disciple" stone statutes found at Buddhist temples in Japan, and gibasa, the word for seaweed in the Tøhoku dialect of Hijikata's youth.

For anyone who had a curiosity as to who that writhing, long-haired man was in "Horrors of Malformed Men" and "Snake Woman's Curse" this DVD is a worthy introduction to Hijikata's dark art form. For fans of 20th-century dance, avant-garde art, and revolutionary culture "Tatsumi Hijikata: Summer's Storm" is an invaluable if rare treasure that should be sought out immediately.
Posted by Chris MaGee at 10:44 PM

Tatsumi Hijikata was born in 1928 and died in 1986. He was a Japanese choreographer and founded the genre of dance performance art called Butoh. This style of dance is highly choreographed and has gestures drawn from Hijikata’s childhood memories of his home in the northern part of Japan. This film features the Ankoku Butoh (Dance of Darkness) which is the avant-garde form of dance which surfaced after the devastation of post WWII Japan. The Ankoku Butoh (Dance of Darkness) also had the influences of Dadaism, Surrealism and Antonin Artaud's Theatre of Cruelty. This dance was founded by the revered Hijikata Tatsumi. “Summer Storm” was his last performance with other dances, filmed at a Kyoto University Auditorium in 1973. The performance was recorded on 8mm film and the footage was restored in 2003, in order to allow audiences to view it in their homes. The DVD can be purchased through the Microcinema International website