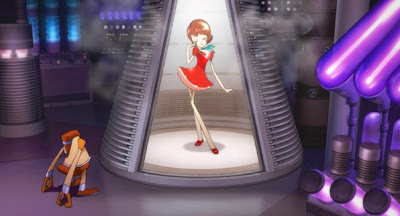 One of the most exciting artists working in anime today has to be Satoshi Kon. The 46-year-old animator and director has brought us some of the most beautiful, compelling, and mind-bending films in the genre since he exploded onto the international scene with his adaptation of Yoshikazu Takeuchi's novel "Perfect Blue" in 1998. Kon has consistently challenged his audiences perception of reality with that film as well as those that followed it, 2001's "Millennium Actress" (my favorite Kon film), 2006's "Paprika", and of course his animated series "Paranoia Agent". It's been three long years since we've seen a feature film project from Kon, but now Todd Brown at Twitch has got news and stills of the anime master's latest film "Yume miru kikai (The Dreaming Machine)".

There still isn't a hell of a lot of plot details floating around for "The Dreaming Machine", but Kon has described the film as being a “future folklore story” that will side with his more thoughtful film "Tokyo Godfathers" as opposed to the heavy duty mind trips of his other films. So far we've got some doll-like depictions of a little girl and what seems to be her robot sidekick. What kind of story will Kon weave around these two? Well, with a title like "The Dream Machine" I can't say that he won't carry some of that modern day "Through the Looking Glass" feel of his previous work into this one.

Click here to see that full gallery of stills that Todd has posted. They're certain to get your imaginations working over time until more details about this project come out.
Posted by Chris MaGee at 6:08 PM