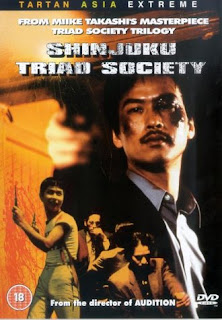 Takashi Miike doesn't waste time getting across the kind of film "Shinjuku Triad Society" (the first film in his "Black Society Trilogy") is going to be. Within the first 2 minutes, you know that this will be a fast, furious and quickly edited movie that is grimy, violent and disturbing. If you've seen a Miike film before, of course, this shouldn't come as much of a surprise, but that opening section really emphasizes it by flitting between a murder scene, a dark dance club, sex in dingy hallways, a pig carcass and another bloody killing in a back alleyway. Fun times ahead... 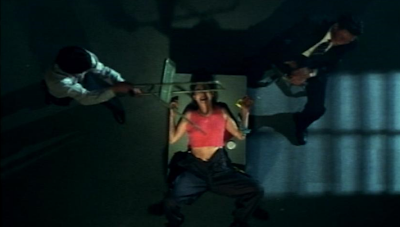 Whether our central character, detective Tatsuhito Kiriya, is in Japan or Taiwan, the streets are always neon lit and inviting, but the internals are where the corruption lies. The ruthless leaders of Chinese mafia gangs square off against each other and provide the impetus for Tatsuhito getting deeper and deeper into not only the local issues, but some of their history as well when he overreaches his authority while in Taipei. If the gangs hadn't come across as ruthless enough, Tatsuhito discovers that they just happen to also dabble in organ harvesting from poor children (for richer counterparts). Since many of these organs are actually offered up willingly for the money, the police don't seem to do much about it. There's moral ambiguity that filters through this entire film as well as its its stock of extremely flawed characters with few redeeming characteristics. For example, Tatsuhito is outraged by the organ trafficking, but he also has no issues with slamming a chair across the face of a female witness.

Both Tatsuhito and his brother Yoshihito are of mixed parentage - their Dad was a Japanese orphan from China and their Mom is Chinese and cannot speak a word of Japanese. There's some similar mixing of the cultures in the gangs as well and it appears to be a launching point for much of their attitudes. Whereas Tatsuhito has no trouble expressing his anger and is an "ends justify the means" kind of a guy, younger Yoshihito has a stone faced external demeanor and has essentially given up on family and society. He's a lawyer, but represents the gangs and is actually privy to their criminal behaviour and decisions. The core of the story is centered on these two brothers as they are the most fully developed characters with the most interesting backgrounds. Not quite enough to really invest you with any emotional attachment to either of them, but their conflict is one of the more interesting "plot" elements of the film.

From scene to scene, the story is action driven and there are few slow moments as Miike keeps the pace of the film moving at a constant rate. Though Tatsuhito does make it his mission to find and rid his district of the gang leader Wang, the film is less of a through line of the plot than it is a series of episodes that convey the ugly underworld of Japan. A crash course in human depravity that you can fortunately walk away from at the end. I leave it to you as to whether that sounds entertaining.

Read more from Bob Turnbull at his blog.
Posted by Chris MaGee at 3:17 PM