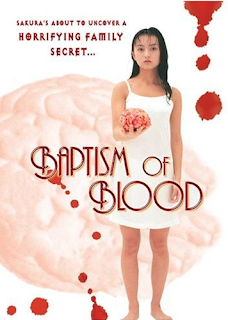 “Baptism of Blood” is a J-horror offering from the late nineties. Adapted from a manga by Kazuo Umezu, its plot is assembled from all sorts of familiar ingredients from the horror genre. It begins by introducing a beautiful young actress named Izumi (Mie Yoshida) who keeps hidden an odd blue blemish on her face. The film then cuts to many years later: Izumi (now played by Risa Akikawa) is now older, strangely renamed Matsuko and the mother of young Sakura (Rie Imamura), who suddenly becomes the focal point of a number of sinister plots. Her piano teacher Tanigawa ((Chihiro Tago) is overcome with lust for her even as he and his pregnant wife Kazuyo (Naoko Amihama) plan to use her to gain access to her mother’s riches. However, the biggest threat to Sakura comes from Matsuko, who, filled with loathing towards her ailments, schemes to transplant her brain into her daughter’s younger, healthier body.

The film’s storyline, schlocky and ridiculous as it is, makes extensive use of the “body horror” motif best exemplified by David Cronenberg. Matsuko’s facial disfiguration, accompanying limp and desire to claim Sakura’s body as her own all easily recall similar elements from the Canadian auteur’s horror films. Instead of the steady build-up of paranoia and suspicion that I imagined Sakura would go through for most of the film, she instead catches wind of her mother’s terrible scheme only a third into the film – through a single, overly convenient overheard phone call, no less. This leads to easily the most effective scene in the film: the supremely graphic, grisly “surgery” performed by a Giger-esque brain transplant machine. The remainder of the film focuses on Tanigawa and how his own plots (both sexual and financial) are complicated by “Sakura”’s sudden change in behavior. 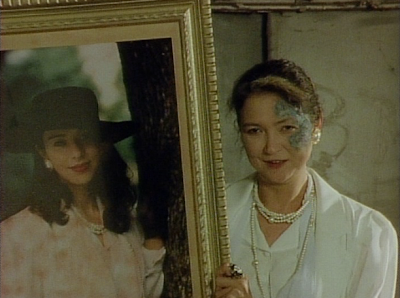 One of the main weak points of “Baptism of Blood” is the noticeable lack of a hero for its viewers to properly connect with. Instead, the only main characters are unappealing villains consumed by their greedy motives, whether it be the creepy seduction between Tanigawa and Sakura/Matsuko or Matsuko’s quest for youth even at the expense of her own daughter. Then there is the flimsy plot, often made apparent by several amusing details, including that convenient phone call, a similarly convenient straight razor that appears just when some ropes need cutting, a random (though cool) cane blade and a late appearance by a police detective who seems more interested in Sakura’s piano than finding out from Tanigawa where Matsuko is. However, the worst move comes in the form of a baffling twist ending that comes out of nowhere, just barely holds together and plays out like a poor man’s homage to “Psycho.”

For the most part, “Baptism of Blood” is a disappointment. With a more original vision or tongue-in-cheek attitude towards its absurd subject matter, it might have been a more impressive film. Instead, it comes across as fairly dull and uninspired – with great exception given to its brain operation sequence, which is wonderfully over-the-top and squirm-inducing. I would recommend horror fans seek out this film for that scene alone; for the rest of the movie around it, viewers beware.

Read more by Marc Saint-Cyr at his blog.
Posted by Chris MaGee at 3:46 PM