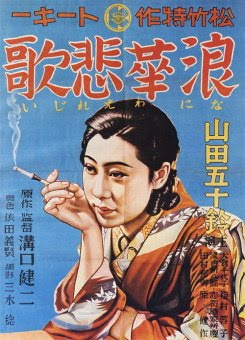 Have you ever watched a film and afterward felt like crying, but couldn’t, because at the same time you where so enamoured with the beauty contained within the film that your heart was conflicted. Every Kenji Mizoguchi film I’ve seen thus far has had this effect on me. Incredibly depressing, and yet cinematically such a marvel of beauty it makes my brain confused. "Osaka Elegy", one of the earliest surviving films by the classic master, and one of his first true masterpieces, seems to create the mould that all his later cinematic renditions of excellence seem to fall into.

Ayako (Isuzu Yamada) is a switchboard operator at Asai pharmaceuticals. When she discovers her father has embezzled 300 yen from his former employers, she quickly comes to realize that she must do everything in her power to help him out of his bind. Her boyfriend, Nishimura, is unable to help, so she turns to her employer, Mr. Asai, who seems to be interested in taking Ayako on as his mistress. In exchange for the 300 yen he agrees. However, as she sinks deeper into the extravagant lifestyle of a mistress of a wealthy man, she soon discovers that her brother is in danger of not completing his university degree due to lack of funds. She soon turns to another suitor, Mr. Fujino, one of Mr. Asai’s compatriots, to help pay for the tuition. But he turns out not to be as weak willed as Mr. Asai, and when Ayako decides to leave him, he quickly strikes back, getting the police involved, and publicly shaming her. 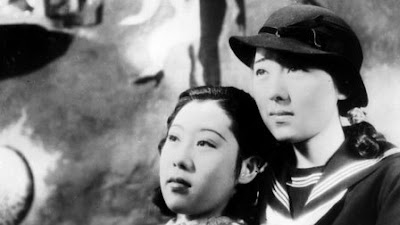 "Osaka Elegy" maybe rough around the edges when compared to Mizoguchi’s later films, but considering it was made in 1936, during the brink of World War 2, when Japanese Nationalism was starting to reach its crescendo, it still manages to exude the beauty that Mizoguchi came to be known for. Long takes, complex tracking and crane shots, a cinematic and metaphoric flair for the use of deep focus and blocking of actors and an amazing mastery over the use of light and shadow, all the hallmarks are here. Narratively the film moves along at a quick pace (the film is only 71 minutes long), and the use of editing is astonishing. Some of the cuts come off as slightly jarring, but he has an amazing knack for jumping in and out of a scene at the appropriate time. "Osaka Elegy" also marks one of the earliest films in which it typifies his depiction of the trials and tribulations of women in a patriarchal society. Ayako, from her earliest scenes, is trapped inside her small glass room at the pharmaceutical company, is inevitably doomed from the beginning of the film. She never really has any choice when it comes to making her decision to involve herself with these rich men in order to support her family and inevitably becoming ostracized by everyone she knows and loves. It’s these same people, her father, her sister and her brother, who forces her into these positions; as the oldest daughter, she must serve them all with essentially her life. And while on the surface its not as condemning towards society as his later films, probably because of the political environment it was made in (Ayako herself claims she’s a delinquent with no cure), when she walks head on towards the camera in the final shot, looking right into the soul of the audience, its self evident what Mizoguchi is trying to say.

I’m sure part of the beauty that comes out of this sad tale is eschewed from the semi-biographical nature of the film. Mizoguchi’s own sister was sold into prostitution by her father, and through her relationship with a much older wealthy man, she paid for Mizoguchi’s education which subsequently led to his artistic career. It’s obvious that he spent much of his cinematic career constantly trying to pay the debt to her that she sacrificed her life for.

Read more by Matthew Hardstaff at his blog.
Posted by Chris MaGee at 3:44 PM