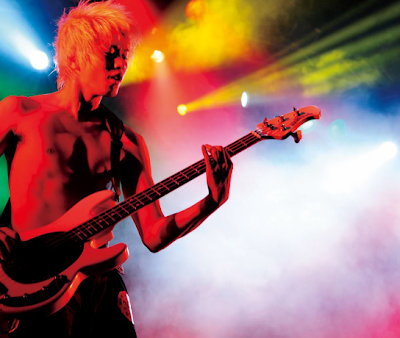 Now that his "20th Century Boys" trilogy has come to its box office-busting conclusion director Yukihiko Tsutsumi is busy working away at another manga adaptation, Harold Sakuishi's manga "Beck." It was in July that we told you how actor Hiro Mizushima was going to be playing the lead singer, Ryusuke Minami, of the fictional rock band at the center of the manga... named strangely enough "Beck"... and that current Pocky Princess commercial talent Shiori Kutsuna was going to be starring alongside him as Minami's little sister Maho.

With all the films that have come out over the past couple years about kids forming rock bands - "Linda, Linda, Linda", "Punch the Blue Sky", "Iden & Tity", "Fish Story" and the upcoming "Solenin" and "Bandage" to name but a few - you have to ask if it's possible for one of these fictional bands to actually rock out. Well, if you check out the 30-second intro that opens the official website for "Beck" then your faith might be renewed, at least a tiny bit.

Besides Mizushima and Kutsuna you can check out the other members of "Beck" played by Takeru Satoh, Kenta Kiritani, Aoi Nakamura, and Osamu Mukai both on stage and off. Decent sound I think, but maybe folks in japan should rethink green-lighting anymore rock band movies for the next little while. They're really starting to glut the market.

"Beck" will be released by Shochiku in Japanese theatres this fall. Thanks to Anime News Network for pointing the way to this.
Posted by Chris MaGee at 3:42 PM