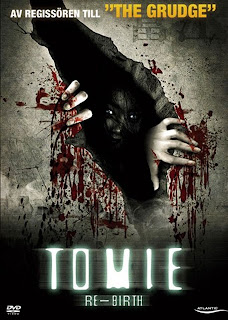 Whilst he repeated himself several times over with the "Ju-on" series, when he steps into a new series, Takashi Shimizu tries to reinvent himself. "Marebito" love it or hate it, was a complete 360 from anything he’d done before, "Rinne" subverted the J-horror conventions he’d been bound to with the "Ju-on" series and judging from things, "The Shock Labyrinth 3D" will be no different. After the success of his first two "Ju-on: The Curse" direct-to-video films, Shimizu was given a chance to make a theatrical film. He didn’t jump straight back into the "Ju-on" series, but instead was given the mantle of directing the next film in the Tomie series. His edition, "Tomie: Re-birth" would be the third theatrical release in the series (and the fourth if you count the straight to video film "Tomie: Another Face", which you really shouldn’t). The first two films each had a very different feel to them, the first a more ethereal giallo type horror, the second far more steeped in its J-horror subculture. But when Takashi Shimizu takes hold of the reins, it becomes an entirely different beast indeed. 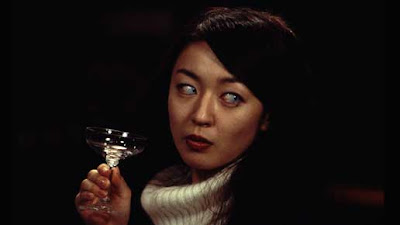 Taking a page straight from Junji Ito’s manga "Tomie: Painter" (and later on several other tales, including "Tomie: Hair") the film begins with Hideo Kamata (played by the often slightly annoying Shugo Oshinari), an award winning painter working on his latest portrait. His subject is a mysterious girl named Tomie Kawakami. Of course, she immediately rejects his painting, destroying it, and so of course Hideo, driven by his mad lust for Tomie, stabs her with his palette knife. He then calls upon his two friends, Shunichi Hosoda (Masaya Kikawada) and Takumi Aoyama (Satoshi Tsumabuki, and yes, that’s two guys who were also in Battle Royale 2) to help him dispose of the body. But then, like clockwork, Tomie reappears, visiting the group of friends on a night out. Soon friendships start to unravel, and Takumi’s relationship with his girlfriend Hitomi (Kumiko Endou) starts to crumble as she begins to exhibit signs that Tomie is slowly possessing her.

Is this the best film in the series? Yes. And no. Miki Sakai is by far the best rendition of Tomie to date. She never blinks. She has a creepily cute giggle. And she creates a more human performance of Tomie, instead of depicting her purely as a monster. It makes the mad lengths people go to in the series far more plausible if there is some slight amount of empathy. The film is technically the best of the series, and that’s probably due purely to Takashi Shimizu. The cinematography is dark and brooding, enhanced by the eerie, droning soundtrack. The camera moves slow, creeping its way towards the characters, ratcheting up the tension. And the special effects allow Shimizu to depict the true nature of Tomie once she’s been destroyed, and her body struggles to grow back into her perfect self. It’s obvious that Shimizu was going for something entirely different with this film, separating himself from "Ju-on" and the film from its pre-cursors, creating a very slow moving horror film that’s more concerned with the disintegration of relationships than it is in shocking the audience. This will probably irk some viewers, and intrigue others. There are still some wonderfully bloody and creepy moments, but they aren’t what the films really about. It’s more about how Tomie, in all her incarnations and forms, manages to survive through manipulation and abuse of power. The one thing it lacks, and the one thing that I found "Tomie: Replay" did far better, was the level of bloody mayhem. Not that a film should be based around that, but when it’s Tomie, and part of the game is the bloody insanity that ensues from everyone’s spirally madness, then it really should try to reach that milestone. But still, Shimizu’s Tomie manages to take the series in wonderful new ways, allowing Tomie to spread in wonderful new directions. Though the perfect rendition of Tomie has still to be made, "Tomie: Rebirth" is still one of the best.

Read more by Matthew Hardstaff at his blog.
Posted by Chris MaGee at 9:30 PM