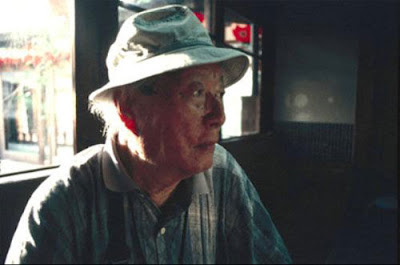 Japanese film lost one of its greatest unsung heroes this past week. Takeo Kimura, production desinger and art director for over 200 films including classics by Seijun Suzuki, died of pneumonia on March 21st in a Setagaya-ku, Tokyo hospital. He was 91.

Kimura was born in Ebisu, Tokyo in 1918 Kimura studied theatre and performing arts before joining Nikkatsu in 1941 as an assistant in their scenery department. He made his debut as a full-fledged art director working on Masanori Igayama's 1945 film "Umi no yobu koe". Kimura would work designing the look of various Nikkatsu productions before being assigned to work with a 40-year-old director who was churning out the studios B-grade yakuza and youth films. That man was Seijun Suzuki and Kimura's first collaboration with him was 1964's "Flower and the Angry Waves" starring Akira Kobayashi. It was the beginning of a partnership that would last, off and on, for the next 37-years and end up encompassing some of Suzuki's most representative works - 1964's "Gate of Flesh", 1966's "Tokyo Drifter" and "Fighting Elegy", 1980's "Zigeunerweisen" and 2001's "Pistol Opera". ""Kimura makes every movie as if it were his last," Suzuki revealed in an interview, saying that Kimura's attitude was often, "'If this is my last [film] then I can do anything I want.' That's why I love working with Kimura as an art director." Obviously both men shared this artistically permissive spirit and would ultimately change the look of Japanese films in the process. The surreal look and of Suzuki's film's simply wouldn't have existed without Kimura. So crucial was Kimura's input in Suzuki's work during the 1960's that he ended up receiving a co-writing credit on Seijun Suzuki's most famous film "Branded to Kill".

With the arrival of the 70's arrived, Nikkatsu's firing of Suzuki for his "incomprehesible" filmmaking style and the studio's shift into roman porno production Kimura went freelance and continued to bring his distinctive visual style to films by Kei Kumai (Sandakan 8), Mitsuo Yanagimachi (Himatsuri), and Kaizo Hayashi (To Sleep so as To Dream). Kimura would also take teaching positions at both the Faculty of Arts, Tokyo Polytechnic University and Associate Professor of Film Studies at Kyoto University. Kimura refused to slow down in the last decade of his life. He set a Guines Book of World Record for being the oldest debut filmmaker with his 2008 film "Yume no Manimani" which told the story of the dean of a college and survivor of the bombing of Hiroshima (Hiroyuki Nagato) and his relationship with a brash, headstrong student (Yoshio Inoue). he would most recently take on production design duties for Kanji Nakajima's "The Clone Returns Home" and art direction duties for Ikki Katashima's "Serial Dad".

Our deepest condolences to Kimura-san's surviving family and friends. Thanks to Japan Zone for the details on this. We leave you with one of Kimura's defining pieces of work - Seijun's Suzuki's "Tokyo Drifter".