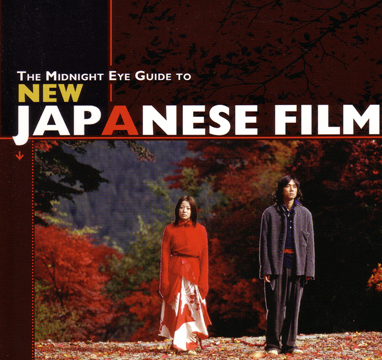 Here's a piece of news that all us Japanese film bloggers are very happy to hear - Midnight Eye is celebrating their 10th anniversary this year! If you write about Japanese cinema online you owe a huge debt to Tom Mes, Jasper Sharp and their rotating crew of writers, reviewers and film scholars. I personally believe that Mes and Sharp are the second wave of Japanese film scholarship after Donald Richie, Tony Rayns, Mark Schilling, Isolde Standish, and many others. You need only look at the filmmakers who have gained an audience in the West as a result of their exposure on Midnight Eye to know that that this is the case - Takashi Miike, Shinya Tsukamoto, Rokuro Mochizuki, Ryuichi Hiroki, Go Shibata, Yutaka Tsuchiya, and Tsuki Inoue to name just a few. Their "Midnight Eye Guide to New Japanese Film" (above) has also become essential reading for anyone interested in what Japan has had to offer cinematically in the past 25 years.

To mark the occasion Mes, Sharp and the Midnight Eye crew (including Nicholas Rucka, Eija Niskanen, Roger Macy, Midnight Eye webmaster Martin Mes, and fellow Toronto homeboy Jason Gray) have named their top films of the past decade. Want to know who picked Miike's "Dead or Alive 2" and "Audition", Koji Wakamatsu's "United Red Army", Hirokazu Kore-eda's "Nobody Knows", and Masaaki Yuasa's "Mind Game" as their top picks of the past ten years? Then head over to Midnight Eye here.

Congratulations on your first decade, Midnight Eye! The Toronto J-Film Pow-Wow wouldn't exist without you.
Posted by Chris MaGee at 3:36 PM

Thanks for the shout out.
Always some great lists on here, too.

Best of luck with Shinsedai again this year.