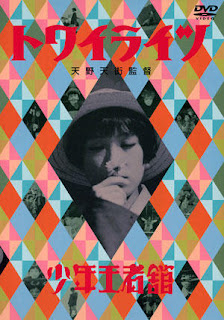 Akira Kurosawa's "Ikiru", Hirokazu Kore-eda's "After Life", Juzo Itami's "The Funeral" - these are not only some of my very favorite Japanese films of all time, but they are all beautifully written and thoughtfully observed explorations of death, and how the inevitable end of our lives shapes our time above ground here on Planet Earth. I was lucky enough to recently watch a film that I'd been seeking out for a long while, a film I quickly discovered could easily hold its own with the above mentioned titles with its stunningly imaginative view of on life and death.

While so many films about death focus on the sunset years of senior characters reflecting quietly on long lives lived Tengai Amano's "Twilight" does the exact opposite. Going against expectations this 33-minute short tells the story of a young boy (played by actress Daiko Ishimaru) who refuses to accept his own death. Without a doubt the death of a child is a tragic circumstance, but "Twilight" isn't a film heavy with mourning. Instead our protagonist goes on a wonder filled chase sequence that includes such road blocks as a diabolical witch, a pesky coffin that keeps popping out from around corners, and "Being John Malkovich"-esque recurring cut-outs of his face that appear on walls, in windows, and of course the numerous actors cast by Amano. There's even a scene that has the boy watching Amano's film in a movie theatre. With Amano incorporating stop-motion animation and shooting the entire film at 18 frames per second as opposed to the standard 24fps "Twilight" ends up coming across as a giddy mix of avant-garde Shuji Terayama and "Keystone Cops" Mack Sennett. 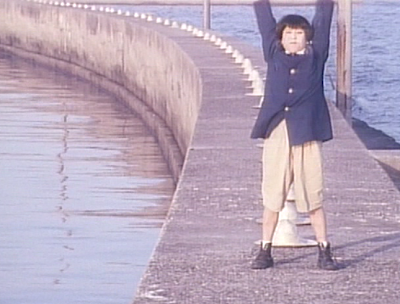 Amano is a well respected playwright and theatrical director in Japan with the Nagoya-based theatre company Shonen-oja-kan, and primary writing directing credits for the two actor (Hideji Oguma and Satoru Jitsunashi) Kudan Project on his CV, but to date "Twilight" is his only film work. With his attention to detail (set in the 1950's "Twilight" features wonderful period specific set dressing) and dizzying creativity on display I have a hard time believing that he A) he ran out of ideas after 1994, and B) that he hasn't received any offers to work on other film projects. "Twilight" ended up taking home the top prize at the 42nd International Short Film Festival Oberhausen and his magic realism aesthetic has been carried on by a slew of younger filmmakers, including animator turned feature filmmaker Mai Tominaga (Wool 100%). For a period of time Amano had mentioned that he had wanted to make a film of Yoshiharu Tsuge's 1968 experimental manga "Neji-Shiki (Screw-style)", but four years after "Twilight" the late Teruo Ishii beat him to it, directing Tadanobu Asano in his own adaptation titled "Screwed".

"Twilight" was produced by the Aichi Arts Center as part of its ongoing commissioned series of films, which also responsible includes Sion Sono's "UTU-SHIMI", Kei Shichiri's "Hottentot Apron: A Sketch", and Takashi Ishida's "The Art of Fugue". Sadly it, like many of these other films (even Sion Sono's) are very difficult to track down in North America. I had to resort to eBay for my DVD copy. It's a shame that this is the case because as I said at the beginning of this review "Twilight" is a fascinating twist on what is often a gloomy genre. What's even more of a shame is that Tengai Amano hasn't got a chance to make his sophomore film. Let's hope that both these situations are remedied sooner than later.
Posted by Chris MaGee at 2:49 PM