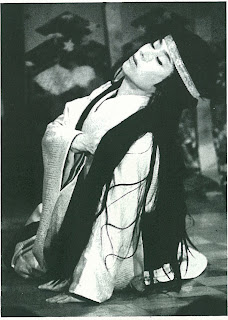 Hanayagi Genshu certainly is an interesting woman. She's a dancer, singer, storyteller, political activist, feminist and even a former inmate. She travels throughout Japan to perform her convention bending dances and make speeches to stir up those she feels have been wronged or held back. "The world will get a little bit better if the oppressed speak out. You musn't be silent". Throughout the hour long "Eat The Kimono" (another film in the Hot Docs 2010 retrospective series of Kim Longinotto's career), the controversial Genshu's voice is at the centre of every scene. Other people chime in occasionally, but the filmmakers focus exclusively on Genshu and what she has to say. The result allows her message to be heard unfiltered, but also allows the viewer to make up their own minds about Genshu herself.

She's not immediately likeable. Our introduction to her is through old news footage of her arrest (for stabbing a dance teacher). As she is being led off by police officers, she shows a strong disregard for what she has done by telling the camera that she will be alright and flashing a peace sign - an odd choice after committing a violent crime. She tends to dominate conversations and, even when dealing with her causes, usually brings the topic around to herself. She never hesitates to mention her struggles growing up as the child of travelling performers, how poor they were and how she was bullied and called names. This led to her current fights against prejudice, discrimination and the pyramid system (ie. class structures) and she uses these stories of her childhood in many of her songs and dances. It's also the reason why she served those 8 months in prison for knifing the dance teacher. Looking back on the incident, she relates that the instructor was talentless but held the position because of her level on the pyramid. She stabbed her because "We have suffered, I want you to know our pain". She also claims that the police made a much bigger deal over the situation than was warranted: "I just cut her neck a little bit". 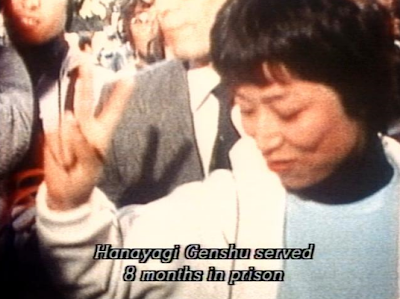 Though possibly slightly delusional, Genshu still manages to get her message across very clearly. Her methods seem to be very effective with her audience as they listen with rapt attention and appear to be very moved by her words. She may generalize a lot, but it's easy to understand how a crowd can be swayed by her pronouncements that "Weak people are getting stronger" and "If it's done to you, do it back". Of course, not everyone is a fan. When she makes statements that Emperor Hirohito has killed more people than Hitler and yet the country still celebrates his birthday, you take her word for it that the far right wing have threatened her. She's also not shy about bringing up other dark corners of Japan's history. She talks about Japan's treatment of Koreans - how many were enslaved and brought to Japan, denied care after Hiroshima (preferential treatment was given to Japanese people) and now get deported back to Korea. She focuses on the patriarchal society of the country as well by stating that men can't commit to love and always look down on women. Instead of always making the sacrifices, she encourages women to break free:

"The kimono comes from Japan's feudal past. It traps women. My art is expressing freedom, even though I'm restricted...You musn't be eaten by the kimono...You must eat the kimono, gobble it up."

Genshu uses the kimono a great deal in her lovely dances which fortunately are showcased several times in the film. There's an economy of movement that seems to capture many of her repeated themes of being restricted, struggling against the system and then fighting back via any means necessary. Longinotto and her frequent collaborator Clair Hunt have used a typical cinema verite approach to Gensu's story and managed a difficult feat - allowing a controversial person to clearly get across their message without it being obscured by the personality. Even with all her generalizations, self-serving speeches and questionable methods, the larger message about searching out enforced inequalities in society and helping to eradicate them is still conveyed. You don't have to like her to get her point.

Read more from Bob Turnbull at his blog.
Posted by Chris MaGee at 9:19 PM

I watched this doc on saturday & I definitely like her :)

Oh yeah not just her outgoing personality but also her pretty voice. I really like the part where she is hugging and dancing with her prison friend.