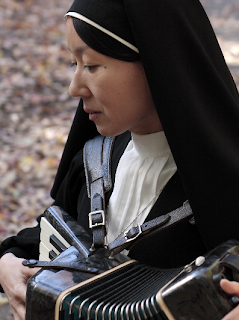 After her highly acclaimed 2007 short film “A Woman Who is Beating the Earth,” rising filmmaker Tsuki Inoue made the logical and eagerly anticipated leap into features with the 70-minute marvel “Autumn Adagio.” It is truly remarkable to see a film from so early in a director’s career that displays so much wisdom and maturity in virtually every aspect, from story (from an original screenplay by Inoue) to visual craftsmanship to performances.

All of the latter are quite strong, but the main event is clearly lead actress Rei Shibakusa, who provides a layered and commanding presence in the central role of the 40 year-old nun Sister Maria. From the very first moment she appears onscreen, it is clear that her character is a deeply unhappy person. She quietly sees to her duties at her church with cool detachment and great thoroughness, determinedly keeping herself at a distance from everyone around her, listening to them whenever she has to with only the slightest changes in her continually reserved expression. Essentially, she keeps her small world under tight control, ensuring that it remains neat and manageable to an intense degree. At the start of the film, she lives in a world where communication simply doesn’t work – mainly due to her own unwillingness to partake in it. An overly enthusiastic and, it is later revealed, desperate man repeatedly pesters her after her church gatherings to speak about his personal issues with little success. Another patron emphatically asks her to come play the piano for a ballet class, to which Maria initially replies with much reluctance. Yet Maria herself is confronted with the same negative attitude in a gardener who stubbornly ignores her when she tries to deliver to him a message from his estranged, ailing mother. 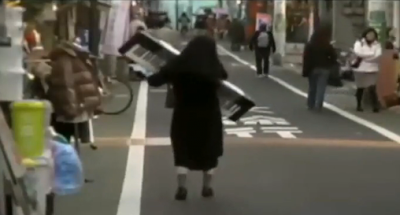 While Maria starts out maintaining an ironclad grip on her femininity and outer emotions, her façade gradually gives way. Certain moments when portions of herself are finally freed are wonderful to behold. One major agent in this transformation is music, with Maria leaving her church organ to express herself through other instruments like the ballet school’s piano and even an accordion. A particularly uplifting sequence floods the previously calm soundtrack with a quick-paced classical piece as Maria rides her bicycle. An even more powerful moment occurs when she sits down at her piano at the ballet school and plays while the class instructor dances in the otherwise empty room to her lovely, flowing notes. As the film progresses, Maria is challenged by more unsettling events that trigger further changes and force her to greatly reconsider her life and values.

Inoue’s confident cinematic style, noticeably ingrained with tranquility and precision, elevates “Autumn Adagio” into the realm of perfection. The digital cinematography by Yohei Ohmori is absolutely stunning, comprised of one eloquent visual composition after another. The film is dominated by painterly fixed shots while the occasional camera movements are smoothly executed. The titular season is taken proper advantage of through vibrant tones of red, orange and gold. Several memorable images neatly encapsulate story motifs and help establish mood: drifting dust motes in the calm ballet studio, the empty streets of a residential area damp with rain, the smooth keys of the organ Maria plays and polishes. Many viewers are likely to be reminded of Ingmar Bergman’s films (including, obviously, “Autumn Sonata”) by “Autumn Adagio”’s masterful control, deep ideas surrounding faith and human nature, autumn imagery and stirring classical score (provided by Shibakusa herself).

Rightfully championed by Tom Mes (who introduced the film at Nippon Connection), “Autumn Adagio” is certainly a great film by any measure. Yet it inspires on a number of select levels: it sets a high standard of quality for digital films to strive for, it firmly establishes the place of an exciting new female director and it showcases the brilliance that is possible when a talented actor is fitted with the right part. Those who make the effort of seeking out a screening of “Autumn Adagio” will be greatly rewarded.

Read more by Marc Saint-Cyr at his blog.
Posted by Chris MaGee at 9:12 PM