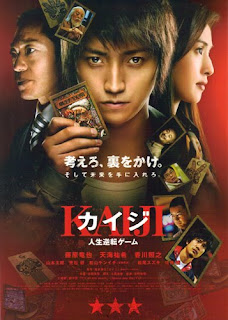 Kaiji Ito (Tatsuya Fujiwara) has a problem. Not only is he working at a dead end job as a check out clerk at a convenience store, but he's also a gambling addict. His once 300,000 yen debt has ballooned with interest to a painful 2 million and he simply doesn't know what to do... that is until he is given (to quote "The Godfather") an offer he can't refuse. A beautiful debt collector (Yuki Amami) tells Kaiji about a gambling cruise ship named Espoir, French for "hope", where if he's lucky Kaiji can erase his debts in a single night. A bit suspicious Kaiji boards the ship and finds himself, along with a room full of dozens of other "losers", participating in the 23rd annual Creative Cruise hosted by the the lizard-like Tonegawa (Teruyuki Kagawa). The goal of the cruise is simple - play a game of rock, paper, scissors and come out with your debts cleared. Okay, it's a little more complicated than that. Tonegawa goes into great detail as to how the game of Ja Ken Pon (rock, paper, scissors in Japanese) will play out - each players gets three stars to wear on their shirt and a dozen Ja Ken Pon cards. Each time they lose a game they lose a star. If you can get rid of all twelve of your cards and manage to hold onto at least three stars you win. That means you get a load of cash and you leave the boat. If you don't get rid of your cards and have less than three stars... well, you get dragged through a door kicking and screaming. It turns out on the other side of that door is a life of enslavement where Kaiji and eventually an old gambling biddy named Sahara (Ken'ichi Matsuyama) are put to work in an underground mine. Their job ends up being to build a new city (I suppose) for a secret society headed up by screen veteran Kei Sato. Why they're building city, or whatever they're building, we never find out. 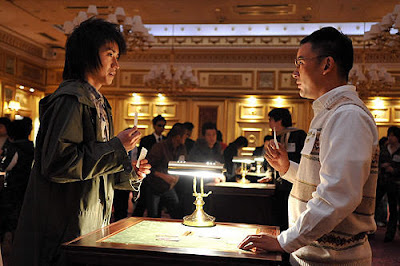 This huge plot hole is just the first problem with the disastrous "Kaiji", a film that ends up being a very uncomfortable mix between the social commentary of Sabu's recent adaptation of Takiji Kobayashi "Kanikosen", Tatsuya Fujiwara's career defining film "Battle Royale" and televised poker shows. One could argue that, like "Battle Royale", "Kaiji" functions as an entertaining allegory of Japanese society, especially the Japan that in the past few years has seen the worst recession in its economic history since WW2. There may be Japanese snowed under by huge amounts of debt who might feel a certain amount of catharsis from watching Kaiji overcome his seemingly no win sitution. The problem is that this allegory is that it isn't entertaining. Set aside the identity and intentions of this secret society and what "Kaiji" gives us is one elaborate and cruel game after another. First we get the Ja Ken Pon, then a race between two skyscrapers across electrified metal beams watched by a group of rich elite members of this secret society on closed-circuit TV, and then a game called E-Card which I won't get into the rules of, because frankly by the time I got to that point in the film I'd given up caring and wasn't paying very close attention. My ears and cinematic sensibilities at already been numbed by Fujiwara's performance as Kaiji which consists mainly of dumbfounded shock followed by ear-splitting screams... that and drinking cold cans of beer and letting out ear-splitting screams of appreciation. Really.

There was a decent amount of advance buzz surrounding "Kaiji" due to the onscreen reunion of Tatsuya Fujiwara and Ken'ichi Matsuyama who had starred opposite each other in the two blockbuster "Death Note" films, but even this duo can't save "Kaiji". While Fujiwara liberally chews the scenery in scene after scene I held out hope that Matsuyama, who we know can act through his superb performances in "Shindo" and "Detroit Metal City", might fare a bit better with the character of Kaiji's old gambling buddy Sahara. Sadly that's not the case. Matsuyama might not achieve the same decibel level as Fujiwara his performance ends up swinging from growling resolve at his enslavement to even more yelling and screaming. Even Teruyuki Kagawa, one of Japan's best actors working at the moment, takes the villainous Tonegawa into such over-the-top acting territory that William Shatner would end up telling Kagawa that it might be a good idea to dial things down a little bit. It seems that in the world of "Kaiji" more always equals better.

Like the rich elite who sit and sip champagne as they relish the suffering of Kaiji and his cohorts I could only see director Toya Sato and the producers of "Kaiji" the film being entertained by its game show strategies and hyper-dramatics. For those of us unfortunate enough to be sitting in the audience the whole experience is just painful. Not to give away any spoilers, but the fact that the film's ending leaves things wide open for a sequel or sequels makes me shudder.
Posted by Chris MaGee at 12:47 AM