NIPPON CONNECTION '10 REVIEW: Kakera: A Piece of Our Life 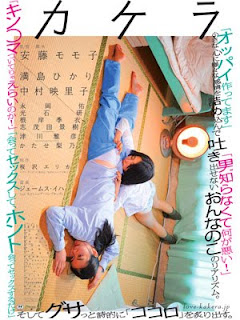 If there is one "buzz" film at this year's Nippon Connection it would have to be Momoko Ando's same sex romance "Kakera: A Piece of Our Life". The debut film by the daughter of actor/ director Eiji Okuda (Shoujyo, ) and TV personality and essayist Kazu Ando got its international premiere at last year's Raindance Film Festival in London in September, was quickly snatched up by UK distributor Third Window Films shortly after, and by the end of the year it was being included on a number of Top Ten Best of 2009 critics lists. When any film is so quickly showered with ovations I always get a little suspicious, and going into a film festival I always prioritize my "must-see" list not by buzz, but by films that I may never get a chance to see again, so with that in mind "Kakera" was somewhere on my "maybe" list - if I didn't see it at Nippon Connection I would catch it somewhere else or on DVD. It was Midnight Eye's (and Raindance's) Jasper Sharp who convinced me to see "Kakera" now, and on the big screen, and I have to thank him whole-heartedly. While "Kakera: A Piece of Our Life" isn't a perfect film, it's certianly an exceptional one that very much deserves all the buzz that's surrounded it.

Haru (Hikari Mitsushima) is a meek University student studying English literature. She has a boyfriend, a low-level academic named Ryota (Tasuku Nagaoka) who's less than an ideal partner. He wolfs his food down, snores in bed, and likes to shoot pigeons with hand-carved wooden bee-bee guns, but Ryota's flaws go deeper than these little annoyances. He basically uses Haru for sex and when he can't get it from her he goes to another girlfriend he is openly cheating on Haru with (or he's cheating on this other girl with Haru...) At no point does Haru say that she wishes she could give up on men entirely, but when a strange young woman named Riko (Eriko Nakamura) comes on to her in a cafe one afternoon she definitely doesn't turn her down. Despite her spinning sense of sexual vertigo Haru begins dating Riko, a woman whose day job lovingly crafting prosthetic limbs gives a whole new meaning to "You complete me." For Riko her attraction and growing love to Haru makes total sense. She's not attracted to women, she's attracted to certain people, in this case Haru. As Riko explains to Haru above the dry cleaners shop her parents own, the difference between men and women is decided by such arbitrary and microscopic things as chromosones and sperm. How can things so small and so out of our control force us to identify with the concept of "man" or "woman"? It's a convincing argument, but Riko and Haru's relationship isn't one smooth progression though. There are road bumps on the way to love. For Haru it's a sweet young man and fellow University student, Tetsu (Ryu Morioka) who honestly seems to have a crush on her, for Riko it's Tohko (Rino Katase), a flamboyant, tattooed woman in her late 40's who has lost a breast to cancer. It's Riko job to craft her a new one, but the two take their professional relationship even further, even though we can see that Riko would much rather be in bed with Haru. While Riko is a whirlwind catalyst for change in Haru's heart and mind Haru, this meek young woman isn't without personality. Riko's onslaught of love turns Haru's world ever so slightly so everything, including herself in all her indecision, pettiness, playfulness, and innocence, is seen from a whole new perspective. Momoko Ando does the same thing with "Kakera", shifting the audiences perspective and introducing us to a love story that goes well beyond any kind of tired old lesbian chic. 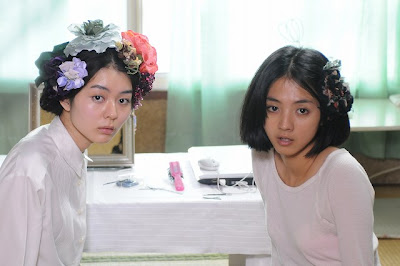 I think the most important achievement of "Kakera: A Piece of Our Life" is that it presents a real view of female sexuality, one that rarely gets seen in Japanese or Hollywood films. Yes, actresses Hikari Mitsushima and Eriko Nakamura are two beautiful young women, but with Momoko Ando at the helm of "Kakera" these two are never presented for the voyeuristic pleasure of a male audience who get turned on by the idea of two women "getting it on". Instead the love between Haru and Riko is presented as genuine, confused at times, and bravely defiant at others. Two women, two humans despite such narrow definitions, can do and will fall in love with each other. Deal with it, guys! Riko and Haru arguing in a smokey izakaya, the anonymous salarymen trying to ignore Riko as she tearfully and unashamedly yells out her desire to hold and kiss Haru, the lesbian bar scene filled with all kinds of women (tall, short, dyke, dom and sub), and even something as simple as the lovely Hikari Mitsushima's unshaven armpit front and center during a sex scene are all perfect examples of this. That's not to suggest that "Kakera" is feminist dialectic designed to distance men with sapphic love and body hair. Not at all. One brief scene that had the men at the audience aat Nippon Connection laughing in recognition with the film was when Haru confesses to Riko that once, after receiving a shot in her behind it went numb, and that when she felt the softness of her bum as if it weren't connected to her she thought, "Aren't men lucky to get to feel something so soft and cuddly?" It's true, we are.

Like any debut feature film there are times where "Kakera" feels a bit baggy and over long, and some of the touches of magical realism (a bottle of soda is thrown into the air by Riko and transforms into a two-headed dove) seem more thaan a bit forced, but every time I felt an urge to check my watch Ando would deliver another funny, poignant moment that would have me thinking "I'm not sure I want this film to end," as opposed to "When is this going to be finished?" The ride that Momoko Ando takes us on with her film, with great help from former Smashing Pumpkins guitarist James Iha who provides the film's wonderful soundtrack, is a cinematic fusion of Japanese film styles (Ozu-esque pillow shots, Kitano-like pacing), all around top notch performances by its stars, and a palpable sense of creativity and empathy. Most importantly "Kakera: A Piece of Our Life" feels like falling in love. Not an easy feat to pull off, but one that Ando has accomplished beautifully. I'll wait eagerly for her next "buzz"-worthy sophomore film, which I can only hope comes sooner than later.
Posted by Chris MaGee at 2:21 AM