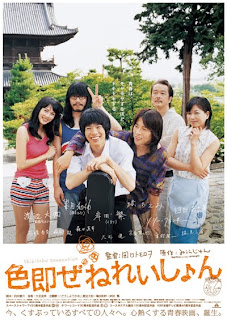 On my first day of film viewing at the 10th Nippon Connection film festival, I had the great pleasure of seeing what might turn out to be one of it's strongest entries: "Oh, My Buddha!," the second film directed by Tomorowo Taguchi, who is best known for his acting work in films as diverse as "Dead or Alive: Hanzaisha," "Gohatto," "The Eel" and "Tetsuo: the Iron Man," in which he plays the title character. Though I haven't yet seen his 2003 directorial debut "Iden & Tity," it is clear from "Oh, My Buddha!" alone that he has developed a very confident and mature understanding of filmmaking, maintaining a sharp control over his style and drawing you into a well-told and compulsively watchable story.

The film follows young Jun, a first-year student at an all-boys Buddhist high school in Kyoto. The year is 1974, and Jun is an aspiring musician who lovingly worships Bob Dylan and writes saccharine love songs in his room. He hangs out with his two best friends while dodging Sudo, the notorious school bully with a violent reputation. Frustrated with his underdeveloped love life, Jun decides to take off with his buddies to an Oki island youth hostel where they believe they will find a paradise of "free sex" - a dream hilariously fuelled by Swedish sex magazines, their rampant imaginations and raging hormones. While there, they meet Hige Godzilla (Kazunobu Mineta), a free-spirited hostel supervisor, and Olive (Asami Usuda), an alluring girl who immediately catches the sex-hungry boys' eyes and with whom Jun soon becomes hopelessly infatuated. 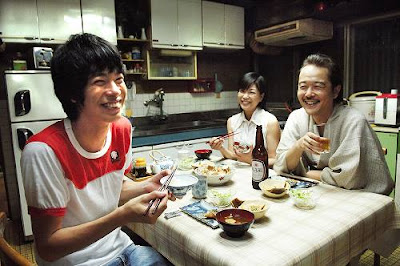 Taguchi embraces this simple and familair premise from the semiautobiographical novel by Jun Miura with great spirit and inventiveness, burrowing deep into the different worlds of 1970s Japan and adolescence. With the former, the film simply brings the era into being through small yet effective touches and telling details. Little things like Jun's radio, records and a few good soundtrack choices are all the filmmakers really need to evoke the sense of time and memory - the great story and characters do all the rest. Another of Jun's heroes is Bruce Lee, who is given a generous and awesomely entertaining homage. The true guts of the film, though, lie in its handling of the rocky terrain of boyhood, which is portrayed with striking accuracy. The awkwardness, lust, uncertainty, drifting opportunities and the many missed ones that so many youths face during that time in their lives are all given heartfelt representation. Daichi Watanabe, who runs away with the film as Jun, was completely inexperienced in both the film industry and love prior to the shoot. His gawky demeanor and touching innocence work perfectly, and his performance was so strong that he recieved recognition as Newcomer of the Year at the Japanese Academy Awards.

"Oh, My Buddha!" follows a clear three-act structure, following the boys from their mundane existence in Kyoto to the summer paradise at the hostel to home once more, changed by their experiences. Of course, there is a sheer contrast between their ludicrous, fantastical expectations and what they actually find at the hostel. The kindly Hige Godzilla soon becomes a warm male role model who emphasizes the importance of friendship, freedom and living in the moment. Back home, Jun finds a similar figure in the hippie tutor who brings him to a "rock 'n' roll" bar, fuels his musical ambitions and, to the boy's amazement, confides in him about his personal problems. Throughout the film, there are many great subplots and moments that really flesh out Jun's adventures, from one of his friends' acceptance into Sudo's gang of "Yanks" to the steady progress and unexpected directions of Jun's relationship with Olive to all of the humiliations he endures - including those from his coddling mother, while Lily Franky's father tactfully keeps his distance, only ever stepping in at just the right moments to help out his son. The climax of the film is a brilliant musical performance in a half-filled auditorium that offers equal parts catharsis and a genuinely great musical experience.

"Oh, My Buddha!" is quite reminiscent of classic American films that similarly present a coming-of-age story through a different era. One might be reminded of "Dazed and Confused" and its own collectives of aimless youths, or "American Graffiti." However, Taguchi wisely never stoops to the level of George Lucas' abrupt, shameless tearjerker twist ending in that film's epilogue. There are certain aspects that are inevitably recognizable from similar films about teenage angst, yet the film admirably never tips completely into clichéd territory. Instead, Taguchi and co. stay true to the characters, reveling in their personal triumphs and sharing their moments of agonizing shame and confused doubt. Sentimental, sincere and hugely entertaining, "Oh, My Buddha!" hits all the right notes for a film of its kind with plenty of charm, energy and style to spare.
Posted by Chris MaGee at 6:46 AM

Note: it appears that this film also goes by the English title 'The Shikisoku Generation.'