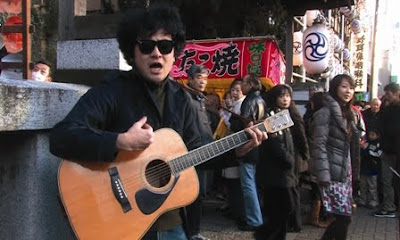 The last half of this year's Nippon Connection was a busy one with Japanese film lovers packing the student residence building at Johann Wolfgang Goethe-University in Frankfurt. Special events that visitors to the fest could take part in were everything from a Saturday night concert by Kenta Maeno the subject of Tetsuaki Miura's "Live Tape", guest curator Tom Mes presenting Tsuki Inoue's feature film directorial debut "Autumn Adagio", and a lecture by John Berra, editor of Intellect Books "The Director of World Cinema: Japan", on seishun eiga, or "youth films" from "Crazed Fruit" to "Crows Zero". Both Marc and I had the honour of meeting the bloggers behind German film website Schöner Denken who were blogging the festival guerrilla-style putting all us other bloggers to shame by uploading their coverage in minutes!

The big news of this last part of the festival was, though, the announcement of the fest winners, both the Audience Award and the newly created Digital Award. The latter was judged by Midnight Eye's Jasper Sharp, Prof. Roland Domenig of Vienna University and film expert Bernd Brehmer and the trio granted the award to Matsue's "Live Tape" (above), shot in one take in one day and one one single DV tape - total cost $15 USD. How's that for D.I.Y. filmmaking? The jury gave a special mention to Kota Yoshida's film "Yuriko's Aroma", a black comedy about about sweat and sex. In terms of the Audience Award ended up going to the CGI-animated "Oblivion Island: Haruka and the Magic Mirror", the story of a 16-year-old girl who travels to a fantastic realm where all the forgotten things form our childhood end up.

You can check the full trailer for "Oblivion Island: Haruka and the Magic Mirror" below. While you all do that I will try and contact Air Canada one more time to see if I can ever get home to Toronto... Before I get caught up in all that both Marc and I would like to thank Petra Palmer, Gary Siegmund, Lukas Brehm, Alex Zahlten, Marion Klomfass, and all the Nippon Connection crew for making this year's fest such a huge success and for making attending the fest so much fun! Congrats!