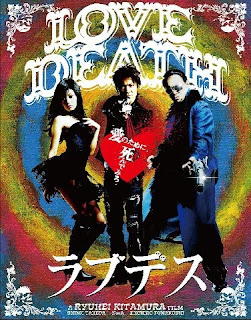 Shinji Takeda plays Sai, the supposedly cool man of action who sports a large tattoo and wears a fur coat with nothing underneath. Nora, in what is obviously her first role in a feature film, is Sheela, the woman object of a local yakuza boss. When she steals a large sum of yen with the help of a bumbling cop who always wears a bulletproof vest, she enlists the help of Sai. They have some lame, supposedly metaphorical conversations about “Chrysalis Day” being the day when the choices you make change the rest of your life, and talk about creatures at the bottom of the sea shining so bright so that others can see that they attract to much attention and are killed. Then they are chased by the Yakuza, a team of assassins and the cops, all trying to get back the money and Nora. Of course, the Yakuza boss wants more than the money and Nora. Sai also happened to blow off the bosses dick on his escape with Nora, and the boss now wants Sai’s penis so he can have it surgically attached, replacing his missing phallus. What follows is a long, slow, and painful chase that climaxes in a prolonged orgy of self indulgent visual masturbation. 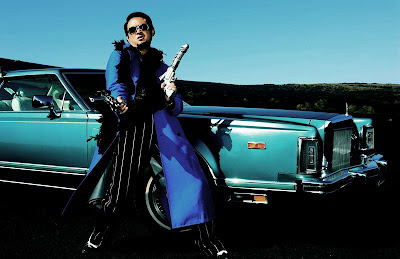 Am I being too hard on this film? Maybe. It’s not like I was expecting a lot from Kitamura. Even though I do enjoy me some "Midnight Meat Train", "Azumi" and "Versus", he’s an incredibly inconsistent director, and this is by far his worst film. The biggest problem with it is the complete lack of chemistry between Sai and Sheela. For a film built around their love for one another, that should have been the most important thing for Kitamura to nail down, and he does a poor job. It doesn’t help that Nora radiates no screen presence at all. But Kitamura fails to show almost any kind of emotional connection between the two. Sure Sai spouts off lines about how she gives him happiness and how he loves her and is willing to die for her, but they’re just words, its just exposition. The first rule of filmmaking is to show the action, not have characters verbalize it. And when they do finally kiss, there is no passion at all, and it comes off quite awkward.

Susumu Terajima has one of the few funny moments in the film, but it lasts for 30 seconds of a two and a half hour film. Many of the supporting characters are quite amusing and quirky, but so much wasted time is spent focusing on their zany antics that really go nowhere, you’re left wondering what the hell the scene had to do with anything. Riki Takeuchi’s cameo is great, but it really served no purpose at all. This film could have easily been an hour shorter, and would have had the same amount of emotional impact, which ultimately was null and void.

The film is cinematically well done, but is full of terrible music cues and a style that is trying so hard to be cool that it collapses under its own self absorbed weight. And yes, it is very much trying to emulate a Tarantino style gangster film, specifically "True Romance". The skeleton of the stories are pretty similar, some of Kitamura’s style emulates that of Tony Scott’s, and it’s just as self referential as most of Tarantino’s stuff. They characters in "LoveDeath" know they are in a film. And they are all trying so hard to be “so cool” that it’s painful. Please, do yourself a favour and watch "True Romance" instead.

Read more by Matthew Hardstaff at his blog.
Posted by Chris MaGee at 12:50 PM

Sometimes a review of a terrible movie is as good as reading one about a great movie.

Considering I was never attracted to this film beyond a high res photo of Shinji Takeda shirtless and wearing low-rise jeans, I'm not surprised. Kitamura is someone whose films I always hover over on Netflix, but never quite makes it above all the other Japanese movies I want.