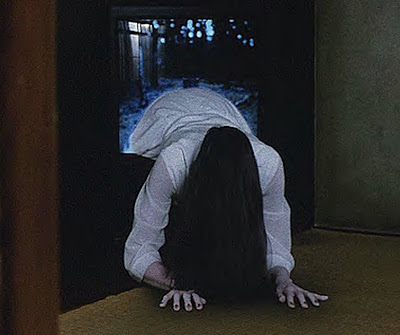 Remember that iconic moment in Hideo Nakata's "Ringu" when the stringy-haired Sadako crawls out of a TV screen to scare Hiroyuki Sanada to death? Well, if Paramount has anything to do with it Sadako may literally be crawling out of the movie screen for a third "Ringu" remake. According to Slash Film Paramount, who took over the rights to the "Ringu" remakes after they split with Dreamworks, are looking to jump on the 3D bandwagon and produce a reinvention of the grandfather of all J-Horror movies that will jump off the screen and will be "teen-centric". Screenwriter David Louka, whose previosu credits include Evelyn Purcell's "Borderline" (I haven't heard of it either) and the 1996 Whoopi Goldberg vehicle "Eddie", has been tagged to pen the script. Thus far there's no sign of Naomi Watts reprising her role in the English-language remake series, and thankfully there's no word of Hideo Nakata being involved.

A "teen-centric" 3D version of "Ringu", huh? It was only last night that Popw-Wow writer Bob Turnbull and I were critiquing film bloggers for at times being less than eloquent with their frequent use of "dude!" and "this film owns!", but I can only think of one thing to counter a 3D "teen-centric" remake of "Ringu" - Crap-tastic!
Posted by Chris MaGee at 9:17 PM

you want to remember that simply ask for gold is not good enough so that your personality to become loaded in the wow gold kaufen game. Another way to buy gold is to go on quests early in the match. This can certainly help you to gold you want. As a new wow gold player with a low level character, you will see that your character can not be too subject to gears for wow gold seller . Instead of spending all your hard-earned in the beginner gear gold, try to put it aside for gears.Grinding high level is another strategy useful for gold for beginning players. Destroy as many of the crowd as you can, especially humanoid wow schnell gold machen monsters. They provide drops of good articles and they even drop gold. You must do what you go to your search because it will allow not only making you rich, but it will also help to gain EXP which will allow your personality to level up.