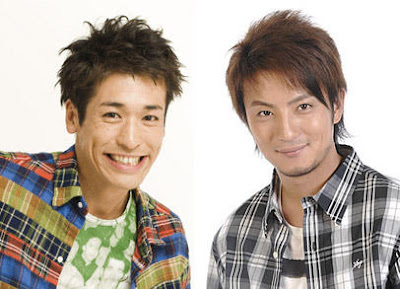 Manzai comedy duos have given us some of the biggest stars in Japanese film. Comedians Itao Itsuji, who has starred in such films as Toshiaki Toyoda's "Hanging Garden" and Hirokazu Koreeda's "Air Doll", got his start as one half of the manzai duo 130R, and "Big Man Japan" and "Symbol" director and star Hitsohi Matsumoto formed one half of the iconic manzai duo Downtown. Oh, and you all know a little guy named Takeshi Kitano, right, a.k.a Beat Takeshi? He famously got his start in the manzai duo The Two Beats with his partner Beat Kiyoshi in the 1970's. Kitano even explored a bit of his early manzai history in his 1995 film "Kids Return". Now another comedian-turned-director will be bringing manzai to the big screen.

Hiroshi Shinagawa, one half of the manzai duo Shingawa Shoki, is currently putting the finishing touches on his sophomore film titled "Manzai Gang". The film stars Ryut Sato (above left) as a down on his luck comedian who manzai partner has quit the group. Sato's character goes into a tale spin that has him end up in the police drunk tank. It's there, though, that he crosses paths with a young street thug played by Yusuke Kamiji. The two make beautiful comedy music together so once they get sprung from jail they head back out onto the stage.

"Manzai Gang" is based on Shinagawa's own novel of the same name, as was his feature directorial debut "Drop!". Japanese audiences can expect to see "Manzai Gang" in the theatres early next year. Thanks to Tokyograph for this news item.
Posted by Chris MaGee at 7:15 PM