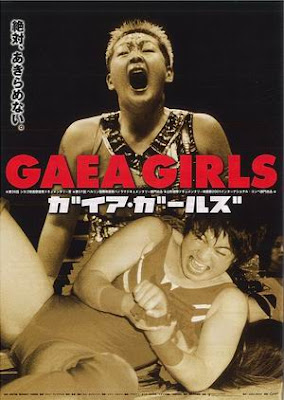 Wrestling was a sport I grew up with. Before coming to Toronto in the late 50's my father had already done the rounds in Manitoba and Alberta fighting as a semi-pro wrestler and bantam weight boxer. My mother would tell me about how she and my dad had been at Maple Leaf Gardens the night that Gorgeous George Wagner lost to Whipper Billy Watson and had his curly blonde locks buzzed from his scalp in defeat. Most Saturdays and Sundays I sat with my Dad and watched the NWA Wrestling matches broadcast from legion halls across Canada, some of them taking place as close by as the old Downsview Arena a short walk from the house I grew up in. Of course my upbringing ended up dovetailing into the WWF Wrestling boom of the early 80s with Hulk Hogan, Jesse the Body Ventura and Andre the Giant. As I grew up, and in some ways out of wrestling, the sport morphed from an often bloody spectacle into what the WWF's chairman Vince McMahon would call "sports entertainment" - mostly bloodless, glossy, Las Vegas-like spectacle. One aspect of pro-wrestling that drastically changed from when I was young was female wrestling. The ballsy and not particularly beautiful brawlers like The Fabulous Moolah eventually gave way to centerfold fighters like Canadian Trish Stratis, "athletes" more concerned with T&A than T'N'T. When I recently attended the Hot Docs screening of Kim Longinotto's and Jano William's "Gaea Girls" though I was taken right back to the golden days of the wrestling of my childhood.

"Gaea Girls" chronicles the world of wrestler Chigusa Nagayo and her league of female fighters dubbed GAEA Japan (Gaea, or Gaia, being the supreme Greek goddess). Founded in 1995 the league is hugely popular in Japan, popular enough to capture the attention of British documentary filmmaker Longinotto. Having previously shot documentaries in Japan on the all female Takarazuka Revue (Dream Girls) and the onnabe, female hosts living as men (Shinjuku Boys) Nagayo's fighters seemed like the logical next step. The world that Nagayo and her league inhabit is far from the flash and dazzle of American pro-wrestling though. Yes, the footage that opens "Gaea Girls" that has an empty ring filled with strobe lights while a booming announcer's voice declares "We are violent! We are freak out!" is sheer theatre, but the matches put on by GAEA Japan are deadly serious. The crowds (mostly female it seems) eat it up though. 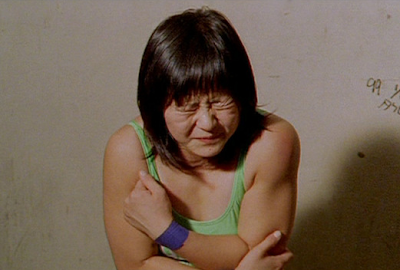 What's even more serious than the squared-circle show though is the grueling training that goes on behind the scenes, the meat of GAEA Japan that Longinotto shoots firsthand, both in the practice ring and throughout the GAEA training gym. Nagayo, her hair cut short to prevent her opponents from pulling on it and died platinum blonde for affect, swaggers amongst her senior fighters like Satomura, a viciously talented fighter, but a bit of a bully, and a series of pledges - Higashiyama, a beautiful young woman who never seems 100% committed to life as a GAEA wrestler, Sato, a pig-tailed youngster whose mother brings her to train with Nagayo, and Takeuchi, a young, mousy woman who burns with a fire to prove to GAEA Japan that she has the stuff to get into the ring with them. It's Takeuchi's story that forms the spine of the film. She not particularly talented as a fighter, she lacks the anger and the flare to be a good wrestler. Through her many sparring matches with the GAEA girls she makes a lot of noise, but seems fearful - fearful to let go, fearful to hurt her opponent, fearful to go the extra inch. yard, mile outside of herself and abandon the polite and pretty young woman she is and to become the warrior she needs to be. Longinotto admitted in interviews and in the Q&A session that followed the Hot Docs screening of "Gaea Girls" that she was shocked and sometimes weot while filming the rabid cruelty that Takeuchi was subjected to during her sparring matches with the senior fighters. One particularly bad match with Satomaru leaves her with clots of blood pouring from her mouth. Shocking for the audience watching the film, but equally as shocking for the pledges and some of the GAEA Japan wrestlers who can't bear to watch what this young woman is being put through and instantly retire from the sport. Takeuchi doesn't let the stitches, the hairline fractures, the bruises and the humiliation stop her though.

"Gaea Girls" is without a doubt a film about wrestling, but in the end Longinotto's and William's documentary is about so much more. First it shows us an avenue for Japanese women eager to do something for themselves, something that doesn't involve taking a job that they'll just give up when they get married and settle into domestic subservience, a reality that persists to this day in Japan. It's also an examination of the senpai/ kohai, or master/ apprentice system of seniority in Japanese society, Nagayo playing the cruel mother... or more like cruel father... who must be respected and deferred to at all times whether it be in the ring or out in the living area where sweeping, daily chores and the punishing exercise regimen seems to be designed just as much to put the young recruits in their place as it is to harden them to fighting. In the end "Gaea Girls" is not an intellectual examination of socio-sexual politics in Japan though. It's compelling human drama mixed with the kind of underdog makes good story that was the key to the success of the "Rocky" films and the story arch of so many pro-wrestlers. The audience at the Hot Docs screening of "Gaea Girls" was on the edge of their seats throughout Takeuchi's multiple backstage qualifying sparring matches. That goes for my girlfriend, Polly Esther, the first fighter in Toronto's own league of women fighters, The Pillow Fight League. Like I said, wrestling has been a part of my upbringing and is still a part of my life. I think the biggest stamp of approval for "Gaea Girls" comes from the fact that Polly, now retired from fighting, left the theatre with many fond memories of the hard but rewarding life of being "Violent!" and "Freak-out!" that GAEA Japan represents. To have someone who lived a story like Takeuchi's and Nagayo's... Well, that's a documentary that comes highly recommended.
Posted by Chris MaGee at 6:36 PM

Watch Kim Longonotto’s documentaries video on demand (not available in US and Canada) http://rep.ly/1Nepq