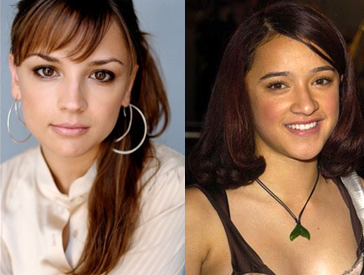 It was in March that it was announced that "All About Lily Chou-Chou" and "Swallowtail Butterfly" director Shunji Iwai was going to be returning from what seemed like self-imposed artistic exile to helm an English-language vampire film. At that time no title had been announced for the project, but it was revealed that Kevin Zegers (Trans America) would be starring opposite Yu Aoi and Amanda Plummer in the story of a shy young man who trolls the internet chatting up lonely women in an attempt to win them over before he drains their blood.

Now Nippon Cinema has revealed the title and additional casting for Iwai's film. This new vampire film, currently shooting in Vancouver, is simply being called "Vampire". Oooookay... Not the best title on the planet, that's for sure. The good news is that the full cast is looking better and better as time goes on. Keisha Castle-Hughes (above right), famous for her role in "Whale Rider", and Rachael Leigh Cook (above left) have been added to the cast along with Kristin Kreuk, Adelaide Clemens and Trevor Morgan; and it appears that the storyline is a little bit different than we had expected. Zegers will in fact be playing a school teacher... and yes, a vampire, not just a shy young man.

Even though everyone is getting a bit tired of the "Twilight" vampire trend you have to admit that it's a genre that never gets old (bad pun). With a director with the visual flare of Iwai this might work. I say might though. We'll have to reserve judgment until "Vampire" (hate that title!) hits theatres next year.
Posted by Chris MaGee at 6:41 PM