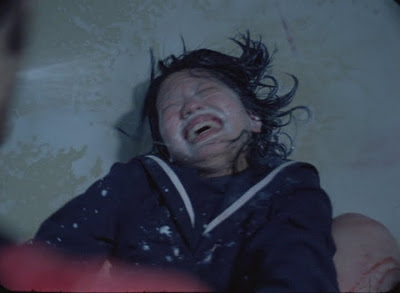 This past week the CFC Worldwide Short Film Festival, running June 1st to June 6th here in Toronto, announced their full line-up. There's good news and bad news for Japanese film fans. Let's get the bad news out of the way first - This year there are only two films in the line up from Japan. Yes, it might be bad news, but it's a minor gripe compared to the good news. That is that the two films programmed are Eisuke Naito's supernatural serial killer short "Prince of Milk" (above) that screened with the neo-noir thriller Yutaka Koide's "So Dark Nights" at this year's Nippon Connection Japanese Film Festival in Frankfurt, and Tetsuo Suzuka's "Clear Skies in May", an Ukiyo-e print come to life that you can catch a glimpse of in the YouTube video below. Both of these are great looking films and considering that Toronto has got the phenomenal Toronto Japanese Short Film Festival we're lucky to have a feast of short films here in the city.

Many more pros than cons and the CFC Worldwide Short Film Festival has so much more to offer in shorts from around the globe that film lovers won't want to miss it. To check out the full line-up and get ticket info check out the 6-day fest's official website here.