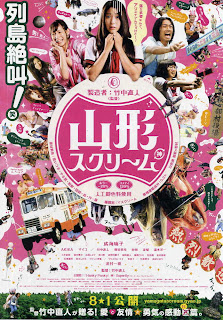 If imitation is the sincerest form of flattery, then somewhere in Hollywood Sam Raimi is blushing so hard he's in danger of rupturing a vessel. "Yamagata Scream" isn't shy about its influences, referencing them in a painfully obvious 'nudge nudge wink wink' way—it's more of a drinking game than a movie. And while films as diverse as "Mr. Vampire" and "Blade Runner" get nods (the former through ghouls that seem to hop everywhere like vintage Hong Kong movie vampires, the latter in a straight-up copy of Roy Batty's head-through-the-wall scare tactic), director Naoto Takenaka clearly has a special place in his heart for Raimi's "Evil Dead 2: Dead By Dawn" and "Army of Darkness", from the film's overall tone down to specific plot contrivances. But the problem is deeper than a monkey see, monkey do approach to direction. Beyond the shot-by-shot homages, the film's plot and characters are completely familiar—there are no surprises to be had, no fun twists or takes on the material, nothing new and exciting. Not only does Takenaka fail to up the ante on Raimi, he doesn't quite scale the giddy heights of the work he's so eager to homage. "Yamagata Scream" is fun but forgettable.

Four high school girls (Riko Narumi, Mirei Kiritani, Saaya Irie and Haru) and their teacher ("My Darling of the Mountains" star Maiko) take a fieldtrip to a small mountain town just in time for the destruction of a local shrine to activate an 800-yr-old curse. A samurai and his loyal men, betrayed and murdered by the townsfolk centuries earlier, rise from their graves with supernatural powers and seek vengeance against their betrayers' descendants. Chases, screaming, mild ooze and confusion all ensue. Add to that Narumi's physical resemblance to the zombie samurai's one true love, Takenaka's shameless mugging, and a ridiculous makeup job on Katsuhisa Namase making him look like Clarabelle the clown, and you can connect the dots. 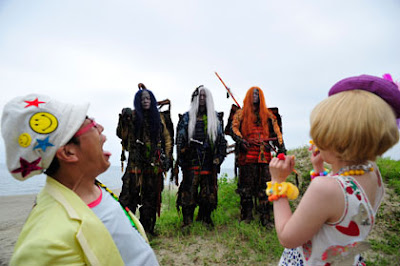 Takenaka is a versatile and prolific actor, perhaps best known in Japan as the gray-haired Lothario conductor in the hit "Nodame Cantabile" TV show and films. North American fans will know him from "Water Boys", where he was the aquarium dolphin trainer and impromptu synchro-swim coach, or "Shall We Dance?" in which he sported a toupee; He's also done drama, such as "Where the Legend Lives" and a film in the "Perfect Education" series. That he's written and directed a handful of movies was news to me; What wasn't news was his friendship with Japanese horror/comedy crown prince Noboru Iguchi. Takenaka played a villainous koi fish Yokai in Iguchi's TV series "Kodai Shojo Dogu-chan", and Iguchi repays the favor with a comic relief featured role in "Yamagata" as a strangely effeminate tour guide, inappropriately dressed as some sort of scout but in a uniform 4 sizes too small. The link to Iguchi goes deeper, it seems: This film could (and arguably should) have been titled "Zombie Samurai Lover" or something shlockier, and it fits very easily into the current crop of horror comedies that so rankle J-film purists. With slightly more gore it would be a minor hit on the festival circuit where "Machine Girl" and "Vampire Girl Vs. Frankenstein Girl" have found appreciative audiences. As it is, there aren't enough laughs to call it a comedy and not enough sticky stuff to call it a gorefest.

Actress Riko Narumi basically hasn't stopped working for 5 years, but maybe she should take a break now and then. Hot off her tonally similar but superior "Crime Or Punishment??" and just before the one-two punch of "Bushido 16" and dance calligraphy film "Shodo Girls", "Yamagata Scream" represents something of a departure for her in that it asks so little of her unique talent. Narumi seems ill at ease playing cute, but she does do smart, pensive, and intense better than any other J-film star under 25. She doesn't seem to have it in her to play dumb, even when she really tries (as in "Crime"). Truth be told, "Yamagata Scream" would be a much better fit for a more cutesy slapstick actress like Takenaka's "Nodame" costar Ueno Juri. Ueno is much more at home mugging and screaming, and might have been able to milk more laughs out of some of the scenes which Narumi's somber seriousness derails. But hey, all this makes it seem as if Narumi was bad, and that's not the case: she's fine, just miscast. In this role she's probably closest to Neve Campbell in "Scream"—too busy being terrorized to realize that the rest of the film she's in is a comedy. She's better than the material, and deserves scripts which allow her to do what she does.

"Yamagata Scream" isn't exactly slow, but it doesn't crack along at enough of a pace to mask its shortcomings. In a post-"Evil Dead 2" world, if you're going to do horror comedy in the same vein you must bring something new to the table. Iguchi has, "Vampire Girl vs. Frankenstein Girl" director Yoshihiro Nishimura has, but Takenaka hasn't. There are laughs and a couple of gross-out moments, but despite the cast's best efforts there's nothing here to elevate the movie beyond cult fringe status.
Posted by Chris MaGee at 6:44 PM