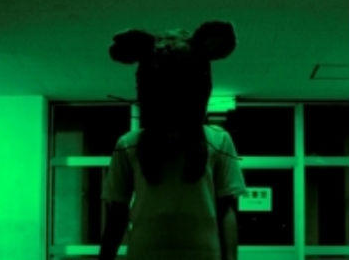 When you read a story about Kenta Fukasaku, son of legendary filmmaker Kinji Fukasaku and co-director of "Battle Royale II", helming a slasher film about a rat mask wearing female murderer killing her high school classmates in various gruesome ways... well you sit up and take notice. That's what I did when I read this story over at 24 Frames Per Second today. Fukasaku's "X-Cross" follow up tells the tale of six high school kids who are prompted to gather in a classroom at 1o'clock in the morning after getting a note from a female classmate who they thought had committed suicide. She may very well have, but they don't have time to puzzle things out because soon they're being sliced, diced and pummeled to death by the "Black Rat".

"Black Rat" is being released in selected Japanese theatres next month as part of the "Avex New Star Cinema Collection Vol.2" The other films in the series are Tetsuo Shinohara's "Ramune", Hisashi Nagashima's "As an Adult Swimmer" and Rin Tadashi's "Custard Pudding". You can check out the trailer for all four films below, but beware that "Black Rat"! She's vicious!

What's the title for the film with the multiplying number of girls? It looks like it could be quite funny, reminding me somewhat of Buster Keaton's Seven Chances.