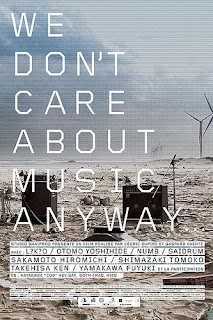 We Don't Care About Music Anyway

It is readily apparent early on in Cedric Dupire and Gaspard Kuentz's "We Don't Care About Music Anyway" that none of its subjects really care about music. At least not from the point of view of creating something for your iPod or stereo system. The subjects are all artists who have a desire to create sound. There's no melody in their creations, not a great deal of structure and only occasionally could you say there was rhythm. It's frankly not even enjoyable to hear. That doesn't mean it isn't interesting though.

The film is essentially a series of performance clips (either with a live audience or staged for the camera) interspersed with Tokyo city scenes and black and white sections of the entire group discussing their methods and approaches to this type of art. They bandy about sentences such as "Conformity is defined by a social consensus" and "Japanese have a poor notion of happiness", so these are not people that are content to settle into the "norm". They want to break apart the standard conception of what you can do with an instrument, what an instrument really is and how sound affects most people. Does a cello have to be played by pulling a bow across its strings? Does the tone arm of a record player have to have a needle connected to it to generate a signal to be amplified? Do you really need to know how to play an instrument at all in order to create something with it? Not according to this group. 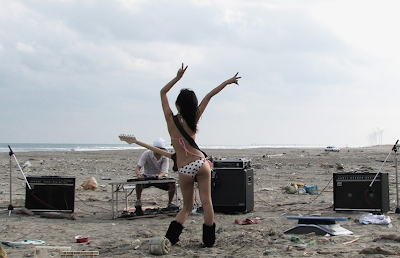 To be fair, they approach their creations with a bit more thought than those last few questions may imply. The film would make an interesting pairing with another of its Hot Docs siblings entitled "Soundtracker". Whereas "Soundtracker" is about sound archivist Gordon Hempton and his search for naturalistic sounds in a world that's populated more and more by the noise of technology, this group of Japanese artists is very much interested in creating their own sounds. Completely new ones if at all possible. Static is their friend, distortion encouraged and random accidental noise is welcomed. The wall of noise created by many of these artists fits in with the many urban landscape shots of the Tokyo surroundings - the soundtrack created by a dump truck wandering through heaps of garbage or a construction site in full swing could just as easily have been a performance piece by any member of the group. Their work feels like a statement against the urbanization and industrialization of their world. So maybe they aren't that different from Hempton after all.

The visuals in the film are often striking. One of the performers works mainly with his own voice and uses contact microphones to pick up the most minute of sounds. In one piece (in front of a live audience), he performs his various vocal tics and bellows with flickering lights all around him. The combination of all the shadows, his long scraggly hair and the rather disturbing sounds create a ghostly and unsettling scene. In another section, a woman "plays" a heavily distorted and amped guitar that manufactures a wall of noise as her cohort layers on an odd assortment of keyboard burps and blorts. The beach where they are performing looks like a battle has recently taken place there, so this aural attack feels very apropos.

"I realized that useless things could be useful". It's the approach each member takes that I find the most interesting. The results are the kind of experimental works that I have found that I don't enjoy as standalone pieces, but that I'm glad exist. Within context, they can provide either an interesting message or a completely new way of looking at something that will reap benefits further down the road. One of the group talks about how he hopes that his own work will stimulate people's memories. At the very least, this is a film I won't soon forget.

Read more from Bob Turnbull at his blog.
Posted by Chris MaGee at 7:19 PM