Hirokazu Koreeda to plan a train ride with children for next film? 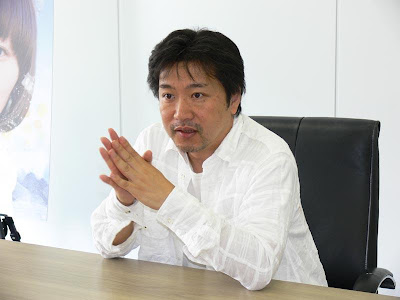 Despite some people believing that his 2006 jidai-geki film "Hana" was a bit of a misstep (I personally couldn't disagree more), it just seems that Hirokazu Koreeda goes from creative strength to strength with each new film. Last year he was almost universally praised for "Air Doll" the fantastic tale of a blow-up sex doll, portrayed by Korean actress Bae Doo Na, who comes to life and falls in love. With the kind of track record that Koreeda has any sliver of news of what he may be bringing us next is welcome. This week that sliver of info came from Ion Cinema (via Wildgrounds). The website did an interview with the 48-year-old director about "Air Doll", but they also managed to get him talking about his next project. Although untitled Koreeda described it as the story of a half dozen children living in rural Japan who go and see the modern miracle of the Shinkansen, or bullet train, that has recently connected their town to the rest of the country. "They will go and see it that’s all I have now," admits Koreeda in the interview, "I haven’t written the script yet. Once I cast the children, then I will get more ideas from them. Once again it’s an interactive process."

Seeing that the Shinkansen began running in Japan in the mid-1960s we can assume that this unnamed project will be set during that period, but besides that nothing is known. It seems like Koreeda himself isn't entirely sure as his shooting method leaves a lot up to, if not chance, then a documentarian's eye for catching unscripted moments. We'll definitely keep our eyes and ears open for more details on this.
Posted by Chris MaGee at 7:22 PM