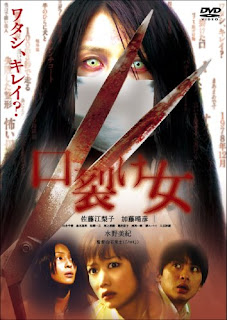 "Carved: A Slit-Mouthed Woman" is based on a popular urban legend involving a disfigured woman with a nasty habit of abducting children and carving them up. There are different variations to the Slit-Mouthed Woman's story. Some say she was a victim of her husband's abuse, while others believe she's a malevolent spirit, hell bent on possessing single mothers and their children. In this retelling, the Slit-Mouthed Woman (Miki Mizuno) was a bi-polar mother who abused her three children mercilessly. Sensing that her disorder was getting out of control, she bragged her son to put an end to her misery by handing him a knife. Out of fear, he slashed her face and then bludgeoned her to death. Or so he thinks. The film begins thirty years after the incident in a small town where children have begin to go missing and all things point to the Slit-Mouthed Woman.

At first glance, "Carved" has all the trapping of a derivative J-Horror flick. It has that grainy low-budget look, stiff acting and an ominous score that's meant to increase the sense of dread. Once the story gets going though, it kind of takes off and becomes its own thing. Unlike many J-Horror films that unfold in a languid pace, "Carved" introduces us to the source of the terror quickly and unleashes the mayhem. One by one the children of the town go missing and the horror intensifies. As teachers Kyôko (Eriko Sato) and Noboru (Haruhiko Kato) try to find out who's behind the kidnappings, they unearth a series of shocking secrets about the Slit-Mouth Woman's haunting past. 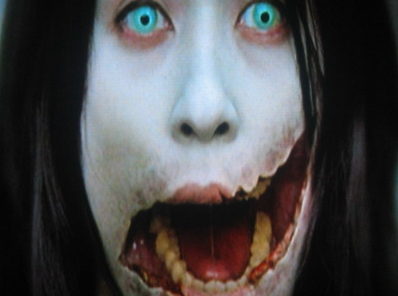 As far as story goes, "Carved" has enough plot twists that makes it a satisfying watch. The writers provide some depth to their boogeywoman by giving her an intriguing back story that offers viewers a glimpse into her character and a reason for why she becomes a vengeful monster. Along the way, the writers even manage to comment on social issues such as the pressure of being a single mother and the welfare of children. Considering the victims in this film are mostly children, you would think the filmmakers would shy away from showing the violence onscreen, that's not the case here. Director Kôji Shiraishi amps up the gore and shoots it in an unflinching manner that gives the film a hard edge. When the film reaches its third act, the terror cumulates in a wildly entertaining showdown between the two teachers and the Slit-Mouthed Woman in an old abandoned house.

As miniscule as the budget is, the filmmakers make the most out of it and actually come up with a pretty awesome look for its boogeywoman. The Slit-Mouthed Woman looks absolutely sinister with her vicious gash on her face, surgical mask and rusty shears. She usually appears from the dark, coughing violently while whispering the chilling lines "Do I look pretty?" Out of all the generic monsters/ghosts that populate horror films, the Slit-Mouthed Woman truly stands out.

Going into this film I really was expecting not a lot. I was fully ready for a cheaply shot film with an uneven story and few chills. So the fact that the film manages to defy the odds and scare me while keeping me engaged with the story was a pleasant surprise. Also, the ending is certainly unconventional and leaves room for thought. "Carved: A Slit- Mouth Woman" is a rollicking good time and for the most part, it's pretty damn scary. What else can you can ask for from a horror film?

Read more by David Lam at his blog
Posted by Chris MaGee at 10:17 PM