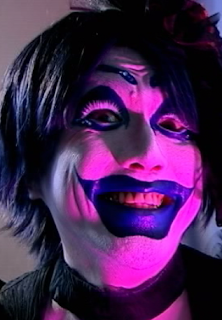 The first time we meet Negiko (Mutsumi Ogiso) she has a noose around her neck. We don't know why. We assume she's unhappy. In her hand she holds her cellphone with the picture of a woman on it. A friend? Her sister? It's unclear. What is clear is that this suicide attempt isn't going to go as planned, especially after the spectre of a woman wearing garish clown make-up appears before her and tells Negiko not to do it. The stool gets kicked out from under Negiko, but she thankfully survives to tell her friend Eiko(Nao Muranaga) (the woman on the cellphone it turns out), about a ghost that showed up in her apartment and told her "Don't do it!" Negiko remains vague on exactly the "it" she was doing at the time. So what was with Negiko grasping Eiko's photo? We get an inkling when Negiko sees her friend meet up with her boyfriend outside the karaoke bar they frequent. This isn't just the jealousy and self-pity of one woman who wants a boyfriend too. Headings back to her apartment she attempts suicide again, this time be slitting her wrists, and once again the ghost appears, and this time it calls Negiko on the exact reason why she wants to end it all - she's in love with Eiko. That and in lust. "She makes me wet!!!" Negiko yells in frustration. If you're reading this and thinking, "Gee, this sounds like a really bleak, depressing film," you'd be wrong. the ghost that comes to Negiko when she is most in need is "Mariko Rose The Spook", the title character in actor/ director Devi Kobayashi's zany and charming lesbian and gay comedy.

Yes Negiko has drama and unrequited love in her life, but when you compare that to living an eternity as a suicide, it's a piece of cake. Mariko Rose should know. She tells Negiko that she's been haunting her apartment for a century, since way back in the Meiji Era and as Mariko Rose says, "The afterlife... is a drag." Negiko doesn't know how true that is until she decides to do a little Google detective work to track down more information on this mysterious Mariko Rose. It turns out she was a he, Jusaburo Araki to be precise, Japan's very first drag queen, proprietress of Tokyo "boy's bar" in Shimbashi, Tokyo and victim of a love gone wrong with an army officer. Mariko didn't have a guardian spirit looking out for her and committed suicide after being dumped by her true love. Mariko doesn't mope about weeping and rattling her chains though. When she manifests herself before Negiko she's decked out in black lace and frills, her elaborate chapeau perched on her head at a jaunty angle and a permanent smile on her face like a cross between a GothLoli and Ronald McDonald. Mariko, not convinced that a boyfriend makes Eiko straight spurs Negiko on with a ridiculously funny and infectiously catchy musical number in which she sings "She could still be bi! She could still be bi!" The plan that Mariko hatches to literally scare Eiko in to Negiko's arm get derailed though when our lovely ghost gets a look at Eiko's amateur paranormal investigator boyfriend though. It turns out he's the reincarnation of Mariko Rose's beloved army officer. 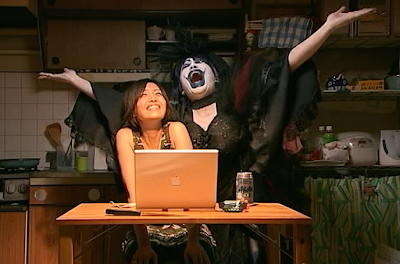 "Mariko Rose The Spook" is an independent production with a capital "I". There's not much of a budget here; and the over-the-top, almost sitcom feel of the film normally wouldn't be something I would latch onto. What changed that for me though was 44-year-old director Devi Kobayashi who also stars as the titular spirit. While Mutsumi Ogiso shows some impressive comic timing with her performance as the lovelorn Negiko it's Kobayashi who steals the entire show and seriously camps it up as Mariko. While there's nothing really menacing or otherworldly about Mariko she would definitely be able send children into seizures of fear with her clown make-up. Mariko, despite being dead 100 years, is all about the joy of life though, not the fear of death; and when I say life I mean luscious and lusty life. Devi rivals the late great Divine with the amount of eyelash-batting and and overall diva presence. She pouts, scolds Negiko, steals her food, turns on household appliances with her "poltergeist power... baby!" and doles out pearls of wisdom like, "Love usually sucks. You're at the other person's mercy regardless of your orientation." She'd also love to just eat cute boys up and shows her trickster side when she uses Negiko's negative energy to take solid form so she can smooch Eiko's none too bright boyfriend and convince him to strip down to his underwear. Let's see Caspar the Friendly Ghost get that friendly...

A few years back Japan produced the wildly popular character named Hard Gay portrayed by pro wrestler-turned-comedian Masaki Sumitani. Hard Gay wore S&M gear and would pelvic thrust in commercials and variety shows all over the country. Hard Gay was also a nasty gay stereotype who's thankfully gone past his sell by date. Some, mostly people who haven't been lucky enough to see "Mariko Rose The Sppok" yet might worry that this drag queen from beyond the grave might be another negative stereotype like Hard Gay, but nothing could be father from the truth. While the character of Mariko is definitely a broad comedic type she's a queen full of good-natured campy humour and cheek and most importantly Kobayashi never whitewashes the same-sex love and desire featured in his film. Love is love whwther woman and woman, man and man, or ghost and reincarnated army officer. If the end of "Mariko Rose The Spook" is any indicator it won't be the last time that we see Mariko, and I sincerely hope it won't be the last time that we see such delightful filmmaking from Devi Kobayashi.
Posted by Chris MaGee at 5:08 PM