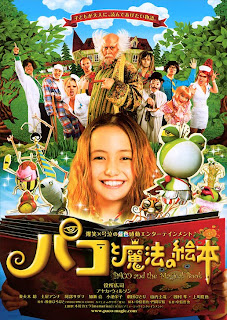 パコと魔法の絵本 (Pako to Mahō no Ehon)

At some ice cream parlors, there exist special-order sundaes so absurdly huge that management will put your name on the wall if you finish one. These 20-scoop, 20-topping monstrosities blend dozens of flavors which are delicious on their own, but together? The first few bites might taste OK, but as time goes on the whole shebang melts into a rainbow soup of textures and flavors that is none too appetizing, and what should have been a treat becomes something unpleasant. These mega-sundaes epitomize the term "too much of a good thing."

And so goes "Paco and the Magical Picture Book". Co-written and wholly directed by Tetsuya Nakashima, the film employs similar thematic and visual tropes to those in his two previous films, "Kamikaze Girls" and "Memories of Matsuko", but is neither as narratively driven as the former nor as emotionally effective as the latter.

Ostensibly a children's film but too intense and meandering for most kids, "Paco" employs a greater number of fantasy sequences than Nakashima's earlier films, augmented here and there by CG animation. The story within a story (think "Princess Bride" on mushrooms) follows the misadventures of a number of colorful inpatients at a convalescent home, specifically how they endeavor to put on a live-action show based on the favorite storybook of a young girl living there (the titular Paco, played by perky Ayaka Wilson). That an already eccentric group of people (Anna Tsuchiya as a foul-tempered nurse, Jun Kunimora as a transsexual, and Koji Takusho as a mean-as-piss old man) will be acting out the story in homemade costumes should have provided enough visual interest, but Nakashima piles color on top of color, wig on top of wig, until the place looks like an entire world designed for the Johnny Depp version of the Mad Hatter to call home. 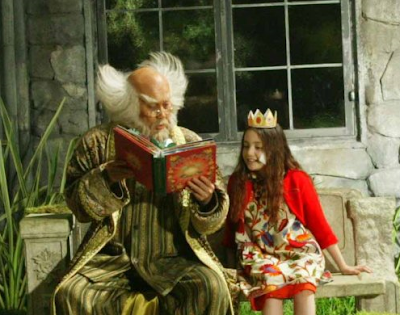 That the story and execution are Lewis Carroll-esque isn't the problem; some of the art direction is vibrant and over the top in just the right way. The mortal weakness of the film is that Nakashima doesn't balance these elements with a real world. Every aspect of the film is like one of Matsuko's fantasy sequences—technicolor everything, crazy costumes, sets covered in flowers or debris or both—and the effect is eye candy overload. Even the 'real world' where the story of the story is being told is all crazy sets and goofball characters—there's no respite from the zaniness. The story can't breathe, and you're never sure what's fantasy and what's reality. That doesn't have to be a bad thing, as in, say, Terry Gilliam's "Brazil". But even a filmmaker as occasionally over the top as Gilliam knows that fantasy ceases to be fantasy if there's no reality for comparison. That I would cite Terry Gilliam as a model of tonal restraint should tell you something about "Paco".

The shame is that so much of the film does work, starting with the performance by Yakusho as a sort of rampaging corporate warlord in his winter years. So mean that he hates that people know his name, he's the picture of fairytale villainous excess in an elaborate wig and flowing robes. He stomps and growls and yanks flowers from the ground, and it's only after he learns of Paco's unique problem that he begins to soften. Yakusho plays the part with an almost kabuki theatricality in order to rise above the visual chaos, but remains the emotional core of the film. It's a big performance. The rest of the cast is hit or miss, gnawing on scenery in an attempt to get noticed amid the clutter. Tsuchiya's role allows her to scowl and holler as she did in "Kamikaze", but also offers a surprising twist; a hapless Ryo Kase mugs his way through a thanklessly one-dimensional part as Yakusho's nephew, but seems uncomfortable throughout.

The movie is worth seeing, but only as a curiosity. A shame, because Nakashima's artistic progression from "Kamikaze Girls" to "Memories of Matsuko" was so striking. "Paco" feels weighted down with ideas and creativity, going from bombastic scene to bombastic scene without giving the viewer much to latch on to. By the time Nakashima hits the brakes to lay on the pathos it seems like an afterthought, like someone absentmindedly offering you a cookie after you've eaten a banana split. Quite simply, it's too much.
Posted by Chris MaGee at 5:02 PM

Thanks for the book intro. I wanted to share my list of Favorite Picture Books You've Never Heard of at http://www.pragmaticmom.com/?page_id=1919

Pragmatic Mom
Type A Parenting for the Modern World

http://PragmaticMom.com
I blog on children's lit, parenting and education