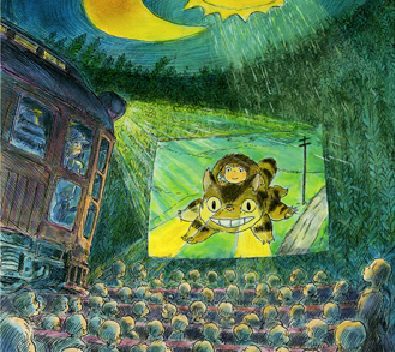 Even though Hayao Miyazaki has said that the chances of it happening are the same as The Beatles reuniting, the dream of all Studio Ghibli fans is that one day the Ghibli Museum short films will one day make it to DVD (Region 1, English-subtitled DVD please!!!). The 69-year-old animation master has directed a seven films that screen at the Mitaka, Tokyo-based Museum's Saturn Theatre, but he has always said that that is the only place that they will screen. So unless you're as lucky as our contributing writer Eric Evans who made a trip to the Museum last year we just have to read about these little marvels.

Now we're giving all of you a chance to read about even more Ghibli Museum shorts. Anime News Network is reporting that Miyazaki's seven shorts will soon be expanded to nine with the addition of "Pan-Dane to Tamago-Hime (Yeast and Princess Egg)" and "Takara-Sagashi (Treasure Hunting)" which will apparently begin screening between November of this year and May of 2011. "Treasure Hunting" sounds like it's easy enough to get our heads around, but "Yeast and Princess Egg"? I don't know if I even want to go there...
Posted by Chris MaGee at 5:00 PM