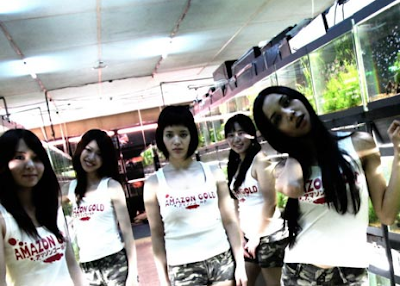 In February we reported on the upcoming Sion Sono film "Cold Fish". at that time the details of the plot were a bit sketchy - based on a true story it tells the tale of two tropical fish dealers who slide into madness and serial murder after one of their daughters is held captive by the other. Madness, serial murder, kidnapping? Yup, that sounds like Sion Sono and the addition of tropical fish, well that's perfect as "Cold Fish" will be one of the first releases from Nikkatsu's newly created "extreme" genre wing Sushi Typhoon.

Now AsiaFilm.fr (via Wildgrounds) has brought us a much more detailed plot synopsis of "Cold Fish". A chirashi, or miniature two-sided poster distributed in Japanese movie theatres, was being handed out at the Cannes Film Festival and it spills the beans, or the cold fish, but don't worry there aren't any major spoilers.

To paraphrase "Cold Fish" is about a tropical fish dealer named Shamato whose home life is less than happy. His second wife, Taeko, doesn't get along with his daughter, Mitsuko, and with reason. Mitsuko has a thing for shoplifting, and one day after lifting some items at a grocery store a mysterious man named Murata to smooth things over between Mitsuko and the store owner. Murata, who is also a tropical fish dealer (talk about coincidence!) is befriended by Shamato and Taeko, but soon they realize that Murata is a compulsive liar as well as being responsible for the grisly murder of nearly 50 people. Not sure how these murders fit in with the babes wearing the wife-beaters in a promo still from "Cold Fish" (above) that has been circulating, but...

Obviously things go down the aforementioned road to madness that is familiar territory for Sono. To get the full synopsis for "Cold Fish" (without spoilers) follow the link to AsiaFilm.fr above. "Cold Fish" is due out in 2011.
Posted by Chris MaGee at 4:58 PM