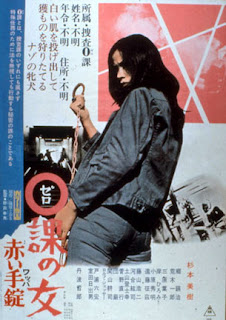 Yukio Noda’s “Zero Woman: Red Handcuffs” certainly wastes no time getting things started. Right away, the viewer is greeted by the tantalizing sight of Miki Sugimoto grooving away on a dance floor. Within seconds of taking a seat at the bar, an incredibly sleazy white guy starts buying her drinks and sweet talking her. They wind up back at his place, where the oafish gaijin ickily peels off her clothes while voicing his amazement at his good fortune. Yet his luck runs out at that moment as the naked Sugimoto tears up his identification documents, then, bristling with fury, makes short work of him with her red handcuffs and a few well-aimed bullets. It turns out that she is a police officer whose unorthodox methods aren’t met with much praise by her superiors, leading to her getting thrown into a prison cell crowded with some nasty occupants. All of this happens within the first four and a half minutes and gives you a good idea of what to expect for the rest of the film.

Many viewers will surely notice that the song played over the opening titles (performed by Sugimoto herself) sounds nearly identical to ones Meiko Kaji sang for her own films (e.g. “Lady Snowblood,” “Female Prisoner #701: Scorpion”) from around the same time. I have no doubt that this is no coincidence, since “Zero Woman: Red Handcuffs” is very much cut from the same cloth as Kaji’s “Scorpion” films. Sugimoto is a noteworthy exploitation icon in her own right, perhaps her most famous film being the 1972 biker chick romp “Girl Boss Guerilla.” As Rei, the maverick cop-turned-“zero woman,” she adds another wonderfully ferocious female warrior to the Japanese genre canon. With her red overcoat, full lips and expressive eyes, she certainly makes for a commanding screen presence and great heroine you love to root for. 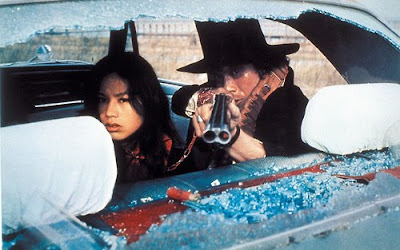 The film’s main story begins to take shape when Tetsuro Tanba’s psychotic crook Nakahara regroups with his gang of slacker thugs mere minutes after being released from prison. Barely any time passes before they find an unsuspecting couple in a car. The woman is brutally raped and taken prisoner while her male companion is knifed to death. It is soon revealed that she is the daughter of an important politician, inspiring the crooks to make ransom demands. Enter Rei, who is assigned to rescue her. In her briefing, she is told the following: “The job is to bring the hostage back alive. The kidnappers are to be killed in any way you wish” – music to the ears of eagerly waiting audience members and zero woman alike.

Rei pursues her prey into a neon-lit nocturnal Tokyo underworld of night clubs and noodle joints, incorporating herself into the gang after rescuing Nakahara from a close call with the police. However, the other hoodlums aren’t quite as easily sold on her loyalty to them, and proceed to carry out a pretty vicious torture and rape session that plays out like a far more sadistic version of the arm cast scene in “The Departed.” Rei is in fact subjected to a fair bit of abuse in the film – but viewers need not worry about whether she will pay back her depraved tormentors in spades. Her steely resolve is broadcasted clearly enough by backlights that fill with color in the same way mercury rises in a thermometer – as if gauging Rei’s boiling rage. Her targets are a despicable lot, with the unhinged Nakahara prone to laughing fits and bursts of violence, such as when he bludgeons the youngest and most conscientious gang member to death with a liquor bottle. In a bizarre turn of events, the thugs relocate to an English school, interrupting a unique rendition of “Romeo and Juliet.” When Nakahara stomps before his stripped captives and growls about his lack of progress in procuring the ransom money with a rifle in one hand, a bottle of booze in the other, a belt of ammo absurdly looped around his neck and an equally absurd wide-brimmed black hat perched atop his head, it is truly a sight to behold.

That hysterical image is also a pretty handy indicator of the overall tone of this movie: raw and rough, but also an absolute hoot. There are indeed many trashy thrills offered up throughout the duration, most of them requiring a good stomach in order to be appreciated. Some of the more memorable ones include another torture scene (this one involving a vice AND a blowtorch), a villainess’ sexy attempt to win over Rei’s trust, gun fights resulting in many a cop’s spectacularly bloody demise and a suitably apocalyptic finale amidst flames, fluttering trash and carnage. Anchored by the lovely Miss Sugimoto and packed with heaping spoonfuls of sex, nudity and violence, “Zero Woman: Red Handcuffs” is a shamelessly shallow, delightfully bonkers, kick-ass ride.

Read more by Marc Saint-Cyr at his blog.
Posted by Chris MaGee at 6:25 PM