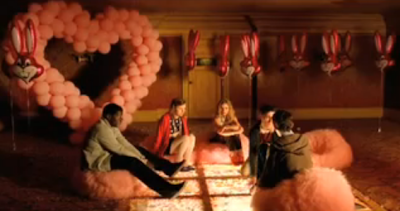 For me there are two highly anticipated films this year. One is Koji Wakamatsu's Edogawa Rampo screen adaptation "Caterpillar" and the other is Hideo Nakata's "Chatroom". We've already had a trailer for Wakamatsu's "Caterpillar", but just today we finally got a glimpse of the trailer for Nakata's "Chatroom", an adaptation of the stage play by Irish playwright Enda Walsh. It seems like Nakata has nailed the story of a manipulative young man named William who befriends four young men and women online. William takes special interest in Jim, a depressive University student who he weans off his meds and sets on a path of destruction.

Yes, Nakata is the man who brought us "Ringu" and "Dark Water", two definitive J-Horror films from the 90's, but for me the one film in his filmography that "Chatroom" will have to live up to is his 1999 mystery "Chaos" starring Miki Nakatani and Masato Hagiwara. If you are lucky enough to have seen this ingenious who-done-it then you know that Nakata is capable of bringing us so much more than terrifying ghost stories. From this extended trailer (it runs for more than 3-minutes!) I think that we'll be seeing a much meatier English-language film from Nakata than his remake of his own "Ringu 2" starring Naomi Watts.
The trailer has been popping up all over the web in the past few hours, but I'll give credit to the might Kevin Ouellette at Nippon Cinema, one of the hardest working men out there blogging about Japanese film. Enjoy the trailer and have your say about it in the comments.

since the youtube trailer has been pulled down,
here it is over at nippon cinema.

Not anymore... West End is emailing everyone IN ALL CAPS telling them to remove it. They didn't want the Cannes promo leaking I guess.