A book for kaiju monster fans comes from Harper Collins 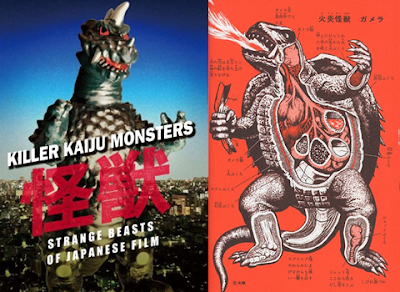 I think I've mentioned it before, but I'll mention it again - I have a secret soft spot for all things kaiju. Godzilla, Mothra, Gamera, all those giant monsters make me nostalgic for my boyhood school days when I used to come home and watch the English-dubbed Japanese monster movies on Buffalo WUTV. Because of my fondness for kaiju I did a double take when I scanned the news over at Sci-Fi Japan this week. Under the title "Killer Kaiju Monsters: Strange Beasts of Japanese Film" author Ivan Vartanian has penned English text to go along with those anatomical illustrations of your favorite kaiju monsters by Mark Nagata, Shoji Ohtomo, Ryohei Tanaka, and Keisuke Saka (like the cross-sectioned Gamera above) that have been popping up online for the past couple of years. A bit of a rehash on the part of the book's publisher Harper Collins, but how many of us have access to the Japanese-language books that these illustrations originally appeared in? Not many, therefore this kaiju movie fan is putting this book on his wish list.