REVIEW: The Taste of Fish 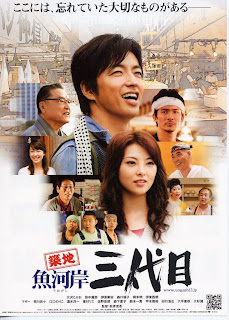 Blame Sakamoto Ryoma and the Meiji Restoration. The rush to modernize to global standards has, over the decades, resulted in many Japanese traditions fading to near-obscurity. That popular films should tap into a sense of cultural pride and hold up traditional customs and occupations as something more than nostalgia is only natural. More and more often, Japanese films and TV shows feature protagonists who abandon the trappings of their westernized lifestyles for something more traditional, more rooted in the national psyche. This undercurrent of nationalism is present in films like the Oscar-winning film "Okuribito", in which the main character leaves behind Tokyo and his tuxedo to take a place in a smaller community rooted in interpersonal relationships. It's a theme which has resonated strongly through Japanese entertainment for the last few years.

"The Taste of Fish" taps into the zeitgeist. Takao Osawa plays HR specialist Shuntaro Akagi, whose job is laying off waves of workers who deserve better (including his former mentor). Nothing says 'salaryman drudgery' quite like the tasks his boss, a barely seen Shiro Sano, assigns him: Deliver my golf clubs to this or that hotel, get my car washed, and so on. It's a bland corporate job in an uncertain economy, and seems like fine if unfulfilling work—until he's presented an alternative. Coincidence leads him to learn that his girlfriend, department store window dresser Asuka (Rena Tanaka), is spending her mornings helping out at world-famous fish supplier Tsukiji Market, where her family has had a stall for generations. Her father (Akira Emoto, playing the same role indistinguishable from the one he's played dozens of times now) is in the hospital, so she's doing double shifts to keep things running smoothly. Ever the good boyfriend, Shuntaro shows up unannounced and declares that he wants to help, but he knows nothing about the fishing industry or its age-old practices. Will he reveal a hidden talent for choosing quality fish and win over her skeptical extended family? Will the couple split up, or come together despite various unconvincing plot contrivances attempting to keep them apart? 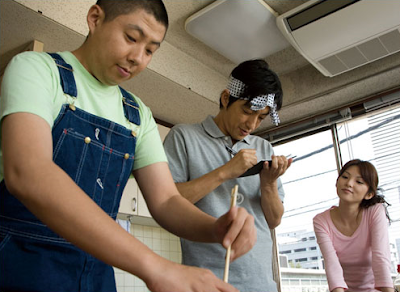 Because romantic comedies are prone to be formulaic, often it's the chemistry of the cast that differentiates the better ones. "Taste of Fish" gets by on charm more often than not due in large part to an underserved supporting cast that's a who's who of J-film faces. YoshiYoshi Arakawa, Shiro Ito and Noriko Eguchi have brief moments here and there, and will hopefully play a larger part in future installments ("Taste of Fish" is based on a long-running manga so there's plenty of story to tell; the sequel, cast presumably intact, is due in theaters this summer). That the most memorable scenes in the film are the brief interludes featuring the supporting cast is not the brightest of signs. For example, Shuntaro's fish-tasting scenes with YoshiYoshi have an easy rhythm that goes a long way. The main cast has less luck. Lead Rena Tanaka is certainly cute and capable of playing quirky and funny, but comes across as shrill and unsympathetic here until the last 20 minutes or so (see "Drugstore Girl" for a good example of her when used properly). Like Ryoko Hirosue in "Departures", she's meant to vocalize the audience's concern at the protagonist's seemingly illogical choice, but "Taste of Fish" doesn't have the dramatic heft of Takita's film. Her character's histrionics play more like plot contrivance than honest emotional reaction. Osawa's Shuntaro seems like a well-meaning but aimless guy, and his early mid-life crisis plays more like a series of coin tosses than soul searching and life rebuilding. Add a jumble of go-nowhere subplots including an insultingly abandoned critical illness, and the result is a movie that's simultaneously overstuffed yet lightweight.

Most annoying is the film's refusal to showcase the actual daily workings of the market. A popular tourist stop for years, the stock-market-like atmosphere and big-money rush of Tsukiji would be a major draw for filmgoers, not least because it would reinforce the concept that Shuntaro is trying to shortcut his way into a position for which he is wildly unqualified. But that might modernize the setting too much, and one of the goals here is to allow Shuntaro to abandon a job in which he produces nothing for one with roots in Japanese fishing customs where he uses his hands for more than rubberstamping pink slips. Out with the suit and tie, in with the rubberized overalls and sweat. Nothing of his no-doubt necessary lifestyle changes is ever mentioned, though it's doubtful he'd be making the same money. In films, as in life, manual labor is always more ennobling than pencil pushing.

"The Taste of Fish" is completely harmless, a mildly charming piffle meant as a nice date film with nothing in it to offend or challenge the audience. As such it succeeds, but superior films have shown us that even the rom-com genre is capable of producing better. Loose ends are tied up neatly, the myriad of characters are given their respective happy endings, and the whole enterprise is easily forgotten.
Posted by Chris MaGee at 5:43 PM