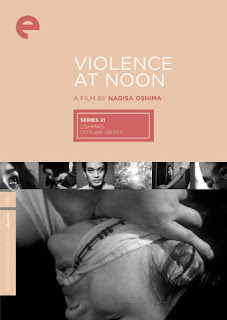 I often think that any Nagisa Oshima film is in fact two films. There's what's going on within the surface narrative and then there's a whole other film going on under that surface, a film not driven by plot or character, but by theories, ideologies, psycho-sexual undercurrents, and political dialectics. Oshima's not called "the Japanese Godard" for nothing. Oshima started out studying law at Kyoto University and he was heavily involved in the leftist student movement that shook the foundations of Japan during the 60s and early 70s and every one of his films showed these influences both in their intellectually rigorous construction and in their intentional provocativeness. I've always found the aggressive push and pull between what's unspooling on screen and the ideas behind the film to be a bit exhausting, which is sadly how I felt after watching Oshima's 1966 true crime classic "Violence at Noon". An astoundingly crafted film it's ideologies weighed on me and on the characters on screen, weighed heavily enough on one of them to lead him to kill. Thankfully there was one insight about this murderer that saved the experience for me... but first, the surface plot.

Shino (Saeda Kawaguchi) is a cleaning woman in a wealthy household. One sunny afternoon a man sneaks into the house, a man that Shino is shocked to see not because he's a stranger, but because it's someone she thought she'd never see again. This intruder is Eisuke (Kei Sato) an evil-looking character who wastes no time getting down to what he broke in to do. He ties up Shino, attempts to strangle her to death and rapes her. Throughout this ordeal that Oshima shows us in a series of rapid fire images of intertwined limbs we are given flashes of an earlier encounter between Shino and Eisuke. It's equally violent with Shino crumpled under tree with Eisuke straddling her while a man with a noose around his neck swings from an overhanging branch. These images have no real meaning for us until the police question Shino about her rape and the murder of the woman of the household at the hands of Eisuke. They believe that this crime is connected to a series of 11 crimes that have occurred across the country, but this is the first where the suspect has killed. Instead of saying "I know who this man is," she plays dumb and does something very curious indeed. She writes Eisuke' wife, Matsuko (Akiko Koyama) to say that she knows Eisuke is the killer and if she has her permission to turn him in. 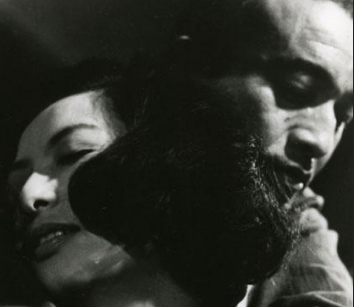 What follows this puzzling request is the exploration of the true life story of Shino, Eisuke, Matsuko, and the man seen dangling from the tree, Genji, actually are. It turns out that they were all members of a communal farm in the countryside, one that was founded with high ideals, but one that literally washed away after torrential rainstorms. Ever since these four individuals have been floundering, trying to come to terms with what they wanted to achieve and what the destruction of the farm has cost them. For Genji and Shino, his lover, it meant a double suicide, one that killed Genji and that Shino survived. For Matsuko it's been watching her husband and former student Eisuke grow more distant. We know that this is because he is slipping further and further into a life of perversion and crime. Eisuke, played with chilling effect by the late Kei Sato, goes about his business stealing, raping and killing while Shino and Matsuko endlessly debate whether they should turn him in, as if doing so will finally put an end to their dreams of communal bliss and political symbiosis. Despite the sheer beauty of the cinematography and break-neck editing "Violence at Noon" 99-minute run time, filled with constant debates between these two women, felt much, much longer. With the thinly-veiled social and political commentary flying fast and furious I often wished that "Violence at Noon" had fallen into the hands of another Japanese New Wave director, namely Shohei Imamura. His intuitive understanding of the Japanese psyche in my mind trumped Oshima's constant over-thinking, and Imamura's own own 1979 true crime film "Vengeance is Mine" is a far superior film to "Violence at Noon".

The most interesting insight that Oshima gives to the workings of Eisuke, and the one that I wish had been made central to "Violence at Noon", is that his crime spree seems to have its seeds in the very moment when he was acting most heroically. We can see the birth of a madman in the few seconds it takes Eisuke to attempt to revive Shino after her failed double suicide with Genji. While we know she's simply unconscious after falling from her tree branch gallows Eisuke is unsure. He frantically tears off her shirt and brassiere, not to rape her but to listen for a heartbeat, but his darker angels know that at this moment Eisuke holds Shino's existence in his hands. They whisper "rape" into his ear, and even worse, the possible rape of a corpse, and Eisuke listens to that whisper. It's his own perspiration that drips onto Shino that brings her back to consciousness and make her witness to this terrifying new development in her former comrade. It's this moment, and Kei Sato's performance, that resonated throughout the remainder of this look at the triumph of nihilism over political and social idealism. If only Oshima had played things simply and given us one story, the story of Eisuke's broken soul, rather than his usual course of using his narrative and characters to beat us about the head and shoulders with his intellect, I would see "Violence at Noon" as a masterpiece.
Posted by Chris MaGee at 6:19 PM