Where's the menace in these stills from Sang-Il Lee's "Akunin (Villain)"? 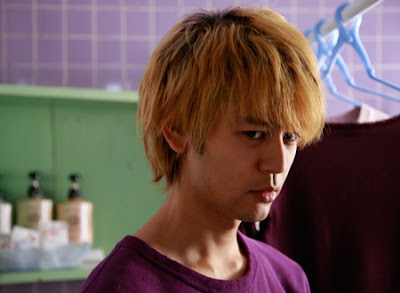 It was back in November when we reported that two people you wouldn't normally think of being involved in a film about a homicidal maniac were in fact involved in just such a screen venture. Those two people are "Hula Girls" director Sang-Il Lee and actor Satoshi Tsumabuki, best known for his roles in "69", "Scrap Heaven" and "The Magic Hour". In Lee's film "Akunin (Villain)" Tsumabuki stars as Yuichi, a lonely young blue-collar worker living in Nagasaki who for unknown reasons kills a woman who he meets through a dating service. His crime is so spontaneous, so random and so brutal that police have a hard time tracking him down as a suspect.

"Akunin" is based on a novel by Shuichi Yoshida, and now in advance of its Japanese theatrical release Cinema Today.jp has posted over 50 (yes, you heard that right - over 50!) stills from the film. What's interesting, and just a little puzzling, is that besudes Tsumabuki's platinum blond dye job there's not much menace or murder featured in these stills. Makes me wonder if "Akunin" is more an innocent man getting framed for a murder kind of film rather than the "American Psycho" is initially comes across as.

You be the judge. Check out this massive gallery of stills at Cinema Today.jp here.
Posted by Chris MaGee at 5:20 PM