AFTER DARK '10 REVIEW: Alien vs. Ninja 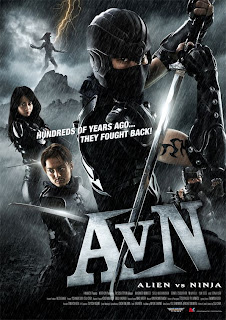 Yamata (Masanori Mimoto) leads his small Iga ninja team through the forests of ancient Japan , decimating his Koga ninja enemies. With him travels his two right hand men; Shuji Kashiwabara plays his equally kick ass and confident counterpart while Donpei Tsuchihira plays the older, and far less wise ninja. While investigating a fireball in the sky, they run into another group of Iga ninja also investigated the same aerial disturbance, this one containing the sole female ninja of the crew, Rin (Mika Hijii, who starred alongside Scott Adkins in Ninja, the far superior ninja film). Before they can say ‘let’s trade shuriken’, they’re attacked by a bloodthirsty alien that tears most of their team limb from limb (literally). Yamata, the over achieving ninja leader, desperately wants revenge and yerns for a good throw down, so with his remaining ninja friends they seek to hunt down and destroy those damn aliens!

"Alien vs. Ninja" is a ‘versus’ film, so I figured I should write it up as ‘the good versus the bad’, because really, with this amount of gore and camp, this type of film walks the fine line between the two, like Ogami Itto walking the path of meifumado. So we’ll start with the good! Yuji Shimomura performed duty as action co-coordinator alongside Kensuke Sonomura. Sonomura does have some good low budget credits behind his name ("Hard Revenge Milly" and "Machine Girl"), but Shimomura is on a completely different level. This guy made the amazing "Death Trance". This guy worked on "Flashpoint", arguably the best martial arts film of the new millennium with the reigning martial arts king Donnie Yen. Yeck, there’s even a nod to "Flashpoint" in one of the "Alien vs. Ninja" fights, complete with ground and pound, Yamata arm barring an alien and doing the Donnie Yen spinning arm windup punch. The fights in this film are pretty fantastic, and the ninja vs. ninja battle in the later part of the film borders on genius. This film promises aliens vs. ninjas, and to that it does deliver, however in small doses. But when it does give it to you, it’s pretty great. The aliens, men bound to rubber suits, are both hilarious and amazing, and the special effects and fight scenes with them are highly inventive, hilarious and at times strangely sexual. Writer/director/producer Seiji Chiba obviously knows his references, and fills the film with musical cues and narrative setups from "Predator" as well as cinematic framings of the reveal of the alien straight out of "Alien". Unfortunately, he has trouble filling out the script with more than just fights. 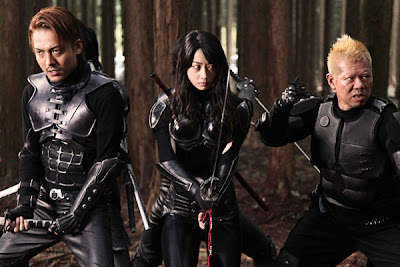 So here’s the bad. The film runs 81 minutes, and maybe half of that is aliens vs. ninja’s. The other half struggles with the comic relief of Donpei Tsuchihira, who’s only obvious purpose is to make this film feature length. Yes, the idea of having an old, chubby ninja who’s only survived because he’s remained in the shadows, never to strike, is pretty funny. And I agree that comedy is a huge part of this film, however, many of the jokes drag on, some aren’t funny, and it really slows down the pace. And I mean really slows down the pace. Anyone who tells you this film is aliens vs. ninja’s from start to finish is either lying to you, or they were blinding by the small amounts of mad ninja greatness that dot the film. It does have some great sight gags, but this isn’t elderly ninja from "Red Shadow" that is actually funny, this turns into often annoying, and rarely funny slapstick comedy.

So here’s my problem. This is one of the first films made by Sushi Typhoon. This is Nikkatsu, who specialized in making some of the more fringe genre bending films from action to pink films. This is Takashi Miike, Sion Sono, Yujji Shimomura, Yoshihiro Nishimura, Noboru Iguchi and Tak Sakaguchi teaming up to make the kind of genre films I demand. And when they make a film called Alien vs. Ninja, I expected something they definitely didn’t give me. This is Sushi Typhoon, not Sushi Breeze, this film should be soaked in alien blood, the screen should abound with alien vs. ninja battles, but instead it’s filled with a few splatters. If this is Nikkatsu’s plan, to spoon feed people really, really low budget films that don’t quite live up to the expectations they deserve, I think this experiment will fail.

On a side note, I demand that they change the aspect ratio from that HD 16:9 crap they use, compulsively shooting everything digitally, abiding by its dull straight to video aspect ratio. I demand Nikkatsu bring back the aspect ratio this kind of film was meant to be seen in, 2.35:1! This demands the wide scope of its sixties and seventies counterparts. You can’t have a decent showdown when the opponents are that close together!!! They need an expanse of land, wide and glorious. But now I’m rambling. Next time Sushi Typhoon, make a Typhoon.

Read more by Matthew Hardstaff at his blog.
Posted by Chris MaGee at 12:49 PM