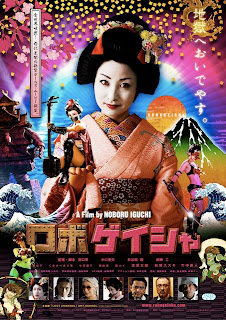 Considering the lineage of "Robogeisha" (the filmmakers were responsible at least in part for "Machine Girl", "Tokyo Gore Police" and "Vampire Girl vs Frankenstein Girl"), one wonders what went wrong. It's not that I loved the team's previous efforts - I had problems with the last two listed - but at least each had moments of truly unique creativity and even beauty amongst all the strange and grotesque gore. "Robogeisha", however, contains only concepts, weird ideas and a few moments of self-reflexive humour. Otherwise it was mostly a pretty big bore.

I suppose that's an odd reaction to a Japanese splatter-gore, sexual-organs-as-weapons, nothing-is-out-of-bounds film seemingly tailor-made for genre festivals. And yet that was my reaction. It's not that there isn't anything of interest here, it's just that it isn't handled with any deft, is bogged down with a pretty uninteresting story and uses CGI effects that sometimes feel 20 years late. It's only saving grace is through some humour that plays against and acknowledges some of the silliness at play here and in previous films. Well, that and the huge robot that makes buildings bleed. 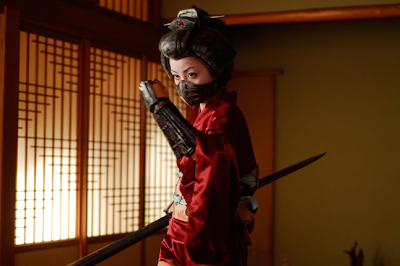 To give the film some credit, it does contain more of a story than its predecessors (which really only contained rough templates) - two sisters become geishas in an anti-government group that trains them to assassinate corrupt politicians. On top of this, and the strange continued mechanization of the women as they become more weaponized, the sisters are at odds with each other and a strong love/hate relationship builds as they drift to opposite sides of the battle. I was actually surprised at the increased effort to bring about more characterization and even, dare I say it, emotion to the film, but it just never engages the viewer in any of those story-related scenes nor does it build any kind of investment in either of the women. They are truly simply vessels through which the imagined weapons (circular saw blades in mouths, swords protruding from rear ends, etc.) manifest themselves. It's all there in the trailer - as a matter of fact, if you watch the trailer'>http://torontoafterdark.com/2010/index.php/feature-films/robogeisha/">trailer, you've mostly seen the movie.

True, you would miss some funny moments such as the three women battling each other with their "ass swords" and mumbling "this is really embarrassing" as they waddle at each other. Or the politician faced with the spinning circular saw cringing and whining "I think this is going to hurt!". There's just far too few moments like this and far too many special effects that are rendered in rather dull fashion. There's a strong feeling that perhaps the filmmakers intended to make a "bad" film, but all they succeeded in doing was making a bad film. For all the flaws their previous films have, the physical special effects with real oozing liquids and protuberances a-plenty were highly creative and somewhat entertaining. Cheap looking computerized graphics (it's possible the film is a test run using different technology for their creations) leave everything flat and lose the sense of absurdity and wonder. Not to mention the fun.

Read more from Bob Turnbull at his blog.
Posted by Chris MaGee at 12:45 PM