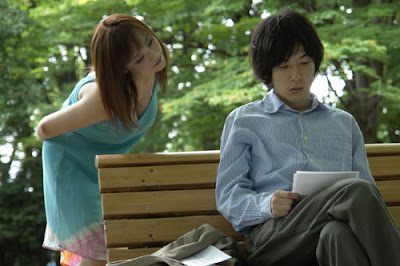 It was only back in April that we reported on how the director of the nostalgic 1996 fantasy film "Village of Dreams", Yoichi Higashi, was returning with a new film starring Tadanobu Asano as an alchoholic author and Aoi Miyazaki as his long suffering wife. The Japanese Academy Award-nominated and Venice Silver Bear-winning director isn't content with just delivering this new drama to Japanese audiences though. Higashi has also written and directed his own pink film titled "Nasu Natsuko no Atsui Natsu (Nurse Natsuko's Hot Summer)". The film tells the story of a white collar worker whose wife is injured in a bike accident. While she recovers in the hospital her husband becomes infatuated with her nurse, Natsuko, and the two embark on a torrid and destructive affair.

"Nasu Natsuko no Atsui Natsu" is part of a series of films dubbed "Bali Erotics" that have been made with disabled audiences in mind. Yes, the producers are aiming the films at people with physical disabilities and to make this erotica entirely available Higashi's film and the other in the series will be screened at the Pole Pole Higashinakano Theatre which is entirely wheelchair accesible. I mean, everyone has urges regardless of sex, race, age or physical ability...

Check out the trailer for "Nasu Natsuko no Atsui Natsu"below and thanks to CinemaToday.jp for this news item.