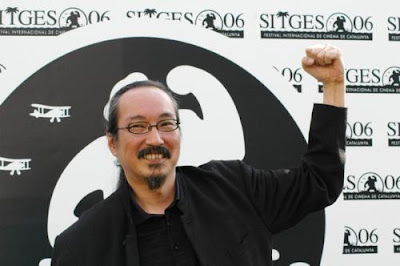 In the past few months we have seen the deaths of some of the most influential, both in front of the camera and behind - actor Kei Sato, director Katsumi Nishikawa, and art directors Takeo Kimura and Kimihiko Nakamura - all men who shaped the history of Japanese film in their unique ways. Their losses were sad, but all of them lived long and eventful lives, passing away in their 80's and 90's. Today, though, the news broke of the passing of a man who has shaped not only Japanese animation, but also film around the world, and the worst part is that he left us so tragically early. Satoshi Kon, the creator of such well known animated films as "Perfect Blue", "Millennium Actress", "Tokyo Grandfathers" and "Paprika passed away. Although details are still sketchy as to the cause of death Cinematical is reporting that Kon died after a battle with cancer. He was only 47.

Born in 1963 in Kushiro, Hokkaido Kon initially studied painting at Tokyo's Musashino College of the Arts. Instead of jumping from school into Japan's art scene, though, Kon worked as the screenwriter on "Akira" creator Katsuhiro Otomo's 1991 live-action film "World Apartment Horror", the story of a yakuza trying to evict a group of illegal immigrants from a haunted tenement building. Kon wouyld continue to work alongside Otomo, first as the set designer on Hiroyuki Kitakubo's 1991 animated science fiction film "Roujin Z", which Otomo worked as a screenwriter, and then as one of the contributing directors to Otomo's seminal 1995 anime omnibus film "Memories". Kon would write the segment "Magnetic Rose" that followed the crew of a space cruiser who respond to an emergency signal emanating from an abandoned space station. The surreal adventure that follows would set the tone for what would become Kon's signature narrative style.

Starting with his 1997 directorial debut, "Perfect Blue", a tale of an idol singer and actress suffering from a mind-altering schizophrenic split that Kon based on a novel by Yoshikazu Takeuchi, Kon would bring audiences stories in which the lines between reality, fantasy and memory blurred beyond recognition. 2001's award-winning "Millennium Actress" would tell the story of a Setsuko Hara-esque heroine whose life history is presented by fusing present-day interviews with documentary filmmakers and scenes from the protagonist's filmography. 2006's "Paprika" would explore the world of dreams through an ingenious technology that would allow a female psychologist to enter into her patients' nocturnal fanatasies. Kon wouldn't always tread the paths of Fantasy though. His 2003 animated feature "Tokyo Godfathers" told the story of a trio of homeless Tokyoites who find and care for an abandoned infant.

Most recently Kon was at work on a feature film that would carry on in his established surreal tradition. In November stills leaked online from an upcoming animated feature titled "The Dreaming Machine" which Kon was describing as a “future folklore story”. There is no word now as to the fate of this production, as the anime world is still reeling from the news of Kon's passing. Rumours first started to circulate via Madhouse, the animation studio Kon had called home, and their Twitter account that indicated that one of their best known directors had passed away. WIt was then confirmed and reported on Anime News Network that the deceased director was in fact Satoshi Kon. Kon's passing comes at a time when his influence is being felt strongly in mainstream Hollywood features such as Christopher Nolan's blockbust "Inception" and Darren Aronofsky's upcoming psychologial thriller "The Black Swan". All fans of Japanese film, anime, animation worldwide and science fiction at large will now be left with only speculation as to the legacy that Kon might have left had he lived into old age.

Our thanks go to Otaku U.S.A. for being the one to bring this very sad news to our attention. Our very deepest condolences go out to Kon's family and friends in this very trying time. We leave you all with the trailer for Satoshi Kon's final feature film, "Paprika".

Such a shock. I have tears running down my face after reading his final blog entry.