REVIEW: It's Tough Being a Man 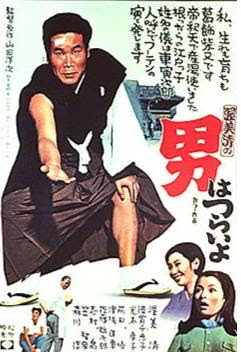 The artful economy of Yoji Yamada's late-career triumphs "Twilight Samurai", "The Hidden Blade", "Kabei: Our Mother", and this year's "Ototo" is the result of decades in commercial filmmaking. The majority of his career was spent directing the adventures of traveling salesman and low-rent Yakuza Torajiro Kuruma, better known to generations of Japanese filmgoers as Tora-san. Of the 48 Tora-san films Yamada directed 46 (skipping episodes 3 & 4), and each is as formulaic as the last. That's not an insult: Some of the greatest film series have been formulaic in the extreme, yet also compellingly watchable. That ability—the talent to craft a tale both new yet familiar—separates commercial filmmakers from mere hacks. And while some Tora-san films may be slightly more compelling than others owing to a particular performance by a supporting actor, Yamada ensured that all the episodes were snappy and clean and entertaining.

Much like Zatoichi films, the appeal of the Tora-san movies is in their formula. Tora-san enters a town, falls in love with someone fated to be with someone else, and somehow causes trouble with his jovial but uncouth manner. His behavior often starts as mannered and respectful but with the encouragement of a bit of laughter or a few too many swigs of alcohol it veers wildly into the inappropriate, and he's stuck trying to make the situation right. Which he does, but through misadventure and often despite himself. This formula has proven so winning with Japanese audiences that a museum to the character draws a steady flow of visitors, and his trademark mole and hat are instantly recognizable visuals. 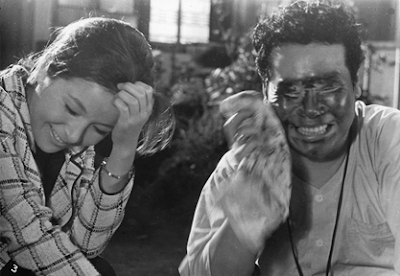 The destination doesn't matter nearly as much as the journey in Tora-san films. "Otoko wa tsurai yo" opens with Tora-san explaining in voice over that he's been away from home for 20 years as he journeys back to Shibamata to see his sister, family, and neighborhood. Not without charm, he gets back and shocks everyone with his gentle and polite manner. This act soon dissolves, leaving Tora the loudmouthed drunkard responsible for spoiling his sister's proposed marriage (among other things). At the family meeting—a vital pre-proposal meal at which every formality matters—Tora gets tipsy and begins explaining why Chinese characters are fun, loudly explaining "'Corpse' and 'water' make urine!" as a mortified Sakura lowers her head. When the only other woman present excuses herself to escape Tora's off-color comments, he hollers after her "Hey mother, you going to the toilet? Where is it, I need to go too—but don't worry, I'm fast!" He's oblivious to his effect on others and seemingly unaware of proper manners. The film meanders a bit, but communicates both Tora's pathological inability to avoid rocking the boat and his good-natured desire to make things right for those around him. You can't stay mad at him any more than you could a misbehaving family pet.

This first in the series boasts an appropriately emotional performance from Chieko Baisho as Tora's long-suffering sister Sakura and a brief yet impactful cameo by J-film legend Takashi Shimusa, but it's the central performance from former Asakusa comic Kiyoshi Atsumi that made this, and all these films, work. It's a tricky thing to be charming and maddening, boorish and childlike, yet Atsumi managed to maintain that balance for 48 films spanning 4 decades. He has a grin so infectious that you smile along with him even as he's committing social blunders. It's said that there are actors and then there are movie stars—people who, for whatever reason, convey charisma onscreen mores than others. Atsumi is made of the stuff.

I'm no sociologist, but I think there's something reassuring about seeing someone break, then work to restore, cultural mores. Tora-san speaks his mind in a way few well-mannered Japanese would; He's brash and blunt and sometimes directly confrontational. He's nomadic, drifting here and there and paying little mind to traditional notions of responsibility to his family or community. "Otoko wa tsurai yo" establishes Tora-san's patterns of behavior without missing a beat. What few wrinkles the concept had were apparently ironed out during the character's year as a TV drama, and the films feel more like extended episodes of a series than stand-alone films. Does the movie work? It's absurdly successful on it's own level. It makes the viewer nostalgic for a Tokyo that hasn't existed since the 1960s, and is never at all disagreeable. It's the cinematic equivalent of a comfortable sweatshirt. If that seems appealing to you, dozo.
Posted by Chris MaGee at 8:52 AM