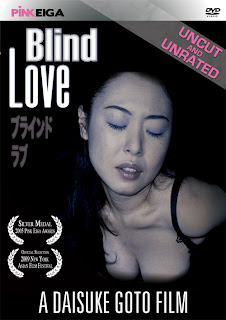 Daisuke (Shota Kotaki) is a struggling ventriloquist. He performs an older style of the ancient art of throwing ones voice, one that is no longer popular in the eyes of the public. He performs with an aging comedy duo, and teaches his dying art to an apprentice, Yoichi (Yota Kawawe), who doesn’t quite have his heart in it. Daisuke’s a sad and desperate man, who’s even being forced into paying for sex from women he once had relations with. And he’s also short, and much, much shorter than the tall and handsome Yoichi. The blind Hikari (Konatsu) comes to a show and becomes enamored with Daisuke’s voice. Unfortunately when she comes to meet him, she mistakes the much larger and sweeter smelling Yoichi for Daisuke. Seeing her incredibly pleased reaction to the fact that Yoichi is so tall, Daisuke uses his ventriloquist skills to combine his voice with Yoichi’s body. What at first seems like a small joke to play on a blind woman quickly backfires as their relationship escalates, and Daisuke must watch as the physical relationship blossoms between Yoichi and Hikari, generating sexy results.

Daisuke Goto worked under the great Masaru Konuma, as well as Yojiro Takita, so he was schooled well before creating his own unique style. This is a guy who knows how to make a touching film that will linger with you for days after, creating it out of the most bizarre subject matter. Cinematographer Masahide Iioka, who also worked with Daisuke Goto on "A Lonely Cow Weeps at Dawn", knows how to make compose a compelling and naturalistic frame. If you don’t believe me, watch "Confessions of a Dog", a film that recently screened at Shinsedai that Masahide Iikoka also lensed. A great story teller and a visually gifted cinematographer and you wind up with a glorious film. 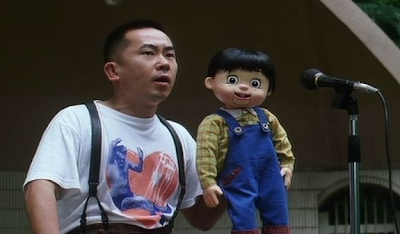 Like "A Lonely Cow Weeps at Dawn", Goto creates a remarkably touching film, although with the help of the oddball Daisuke character, he manages to inject some great humour that’s often subtle, and usually sad. The film makes you smile and laugh, but you can’t help but get the impending feeling that things aren’t going to end well. The sex films are sparse, but when Yoichi and Hikari finally do have a sexual encounter, its painful to watch Daisuke lay next to the two embraced lovers, and yet when he has to say her name like he’s the one having sex with her, its still pretty funny. This great duality is created at the cost of Daisuke’s ego, and it’s gloriously sad and beautiful, much like a Nick Drake song.

Goto does something great with this film that he did to a good degree with "A Lonely Cow Weeps at Dawn", and that is use the sex strictly as a narrative device. What he creates is incredibly naturalistic. Much like Daisuke having to watch Yoichi and Hikari have a sex, the scenes feel like we’re spying on our neighbour’s during an intimate moment. And when he wants to create something more perverse, he moves the action to a sort of love hotel that simulates having a sexual encounter on a subway, so that even the more outlandish sexual behaviour still has logical and natural confines within the film. They become part of the infusion that Goto creates.

Also, the actings great. Konatsu is pretty convincing as the blind Hikari, and Shota Kotaki does a great job of performing physical comedy that entertains but still looks pitiful and sad. Because that is ultimately what the Daisuke character does, use his dummy to poke fun at himself, creating a journey of a sad little man with an expressive face, who entertains us with his misery. His funny, humourous misery.

Read more by Matthew Hardstaff at his blog.
Posted by Chris MaGee at 5:31 AM