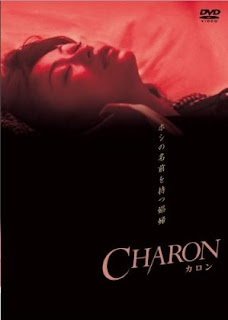 There are many people in all of us. Whether we like to acknowledge it or not we all act differently in different situations. With one group of friends we may act one way, with our bosses and colleagues at work another and with our family members yet another. Maybe only our closest friends and spouses get to the real person inside of each of us... maybe not. One thing for sure is that despite the gaps, the fissures and sometimes that chasms that separate these various aspects of our personality it is highly doubtful that any of us lead as schizophrenic a life as the protagonist in Gen Takahashi's 2004 film "Charon".

It is difficult to say "Leads as schizophrenic a life as Hideko..." when talking about "Charon". It's true that we first meet the main character in this drama (played by actress Megumi Morisaki) she is known as Hideko, the ultra-proper, kimono-clad wife of the author Dai Katsuki (Ryushi Mizukami). Despite her strict rule of never having sex with Katsuki he dotes on him and when he's not home she dotes on the customers of a bookstore where she works part-time. Everything changes about Hideko after a trip to the train station where she literally picks up a whole new wardrobe and persona kept in one of the station's coin lockers. A change into expensive designer clothes and Hideko is now Yuto, a high class prostitute who charges ¥100,000 (roughly $10,000) for two intimate hours with her. Yuto is... well, to say in love would be too strong... she is involved with her pimp (or as he puts is "coordinator and consultant") Michio (Jun'ichi Kawamoto). It's when Yuto goes on her calls that we meet Charon, Yuto's professional name, a woman not unlike Hideko in her genteel manner and willinginess to please. Of course the way in which she pleases as Charon is entirely opposite to Hideko. 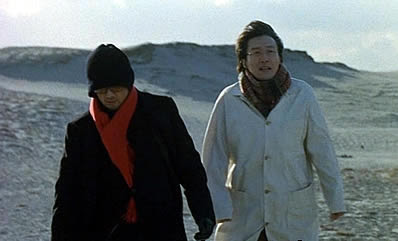 Charon, the name of Hideoko/ Yuto's professional persona, and the title of veteran independent writer director Gen Takahashi's film, is a very apt choice. Charon, as it's mentioned in the film, is the moon of Pluto, a celestial body so far away from us here on Earth that despite the fact that it orbits the exact same sun as us the moon wasn't discovered until a short 38-years ago. Charon keeps up an unpredictable elliptical orbit and when telescopes can get a glimpse of it it is only as a vague shadow in the blackness. Vague, unpredictable, mysterious - this all fits Megumi Morisaki's character in "Charon" to a T. So deep are the chasms between her personaes, so entrenched are the barriers between one woman and another that when Michio encounters Hideko working at the bookstore she looks at him as if he's a total stranger. The same treatment is given to her husband Katsuki when after he discovers her call-girl persona he hires her for the kind of intimate contact that he can never have with his wife Hideko. It's when the men in Hideko/ Yuto/ Charon's various lives begin to stumble past the boundary lines she's created that Charon disappears into the blackness of space. Hideko/ Yuto/ Charon jumps town and goes missing and it's up to the unlikely duo of bookish Katsuki and streetwise Michio to find her and in the process find out who exactly the woman they loved was.

While Charon the woman is an utterly inscrutible mystery "Charon" the film is an absolutely engrossing experience. While our sense of narrative vertigo is particularly acute at the start, with Takahashi throwing us right into the deep end we soon find ourselves eagerly following the various threads of this mysterious woman's existence. Megumi Morisaki's performance isn't showy as the line between easch of her personaes isn't that dramatic. Her personality is drawn in subtle shadings as opposed to clear cut facets, but the most revealing moments in "Charon" come when Morisaki is alone in front of the camera, either browsing through a store, navigating a train station, or walking down a hotel hallway to one of her johns. She is no one at all, a blank, almost ghost-like; and its at those moments that we're convonced that she herself doesn't quite know who she is. That uncertainty plagues both Katsuki and Michio, who once they go in search of the woman they both love (and form a charming onscreen friendship at the same time) begin to wonder what falling for such a ghost of a woman says about them. Who are they that they could get so easily duped?

Gen Takahashi, who brought us the astounding "Confessions of a Dog" proves with "Charon" that he is an expert storyteller, both within the pages of the script, but also behind the camera. He continually utilizes shaky handheld camera work with flashback and ellitical editing to put the audience in the same position as Katsuki and Michio. It takes us a while to get our footing in Hideko/ Yuto/ Charon's world, and just when we think we may know who she is Takahashi takes us further and further away from our original expectations. It's a narrative strategy that works. "Charon" won the audience award at the 2005 Yubari International Fantastic Film Festival, and here's hoping that with the recent intertest in the Weest for "Confessions of a Dog" and Takahashi's manga adpation "Goth" that "Charon" will fascinate and puzle a whole new group of film lovers.
Posted by Chris MaGee at 9:00 AM

Love is a telephone which is always Buy Runescape Gold busy, When you are ready to die for love, you only find, to your disappointment, the line is already occupied rs gold by someone else, and you are greeted only by a busy line, This is an eternal regret handed down from generation to generation and you are RuneScape Gold only one of those who languish for followers.